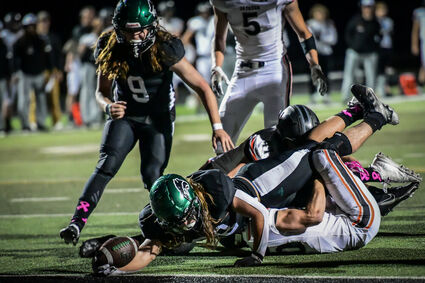 Jackson Mitchell gets tackled and keeps a hold of the ball during the game against the Jackson Broncs.

The Green River Wolves football team scored an impressive team victory over the Jackson Broncs this past Friday, winning 33-17 before a good crowd on Senior night in Green River.

Jackson elected to receive to start the game, and after recovering a squib kick on the 46-yard line they started the game with excellent field position. Jackson's offense got an eight-yard pass completion and an 11-yard run to move deeper into Wolves' territory, but two straight penalties against the Broncs and they had to punt the ball to the Wolves. The Wolves mounted an eight-play drive which included a couple w...