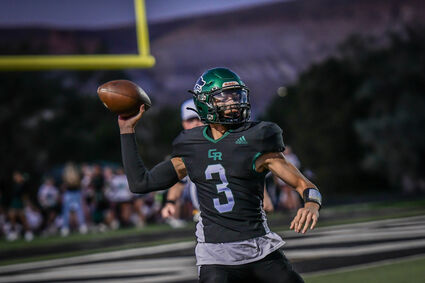 Kale Knezovich gets ready to make a pass during a game in Green River.

The Green River Wolves took the five-hour, 300-mile trip north this past Friday to take on the two-time defending State champion Cody Broncs, who are 4-0 this season, on their home field on homecoming night. Cody had by far the largest contingent of football players in 3A on their roster with 105 players out this year, giving them a very experienced deep squad.

The Wolves kicked off to Cody and caught a break right away as it was a short kick and the Wolves recovered what appeared to be an inadvertent on-side kick. On first down, Green River's senior quarterback Caleb Lake connected with fe...