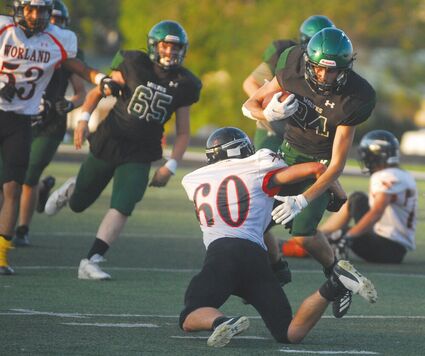 Dylan Taylor attempts to break a tackle and earn more yardage during the Wolves' contest with Worland Friday night.

Green River hosted the Worland Warriors on Hall of Fame night before a large home crowd, but were unable to secure a win in the high-scoring game.

The Warriors came into Wolves Stadium with the largest contingent of players in the school's history, which included a number of experienced seniors on the roster.

The Warriors appeared to have the advantage in team speed while the Wolves had the size advantage. Green River's coach Kevin Cuthbertson said Worland had a very athletic team and ran the RPO (run, pass, option offense) better than any high school team he ever coached against.