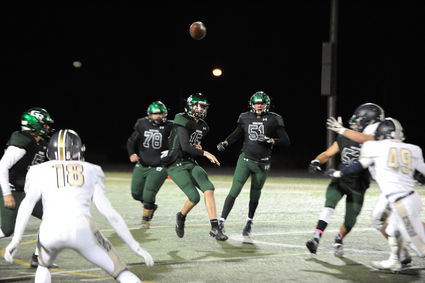 Green River Wolf No. 15 Jachob Fuss throws the ball as hard as he can to one of the receivers during the Cody game Friday night.

In a close contest that was in doubt up until the last minute of the game the powerful 6-1 Cody Broncs came into Green River and in a defense-dominated game defeated the 2-5 Wolves who played hard and had a chance up to the end, to take the No. 2 seed into the State playoffs.

The Wolves came up short though, and their season ended with a 17-10 loss.

The Broncs only offensive touchdown of the game did not come until 9:30 in the forth quarter as the Wolves defense gave up 200 yards on the ground, but played aggressive defense, forced Cody to commit six turnovers with five fumbles and one inte...