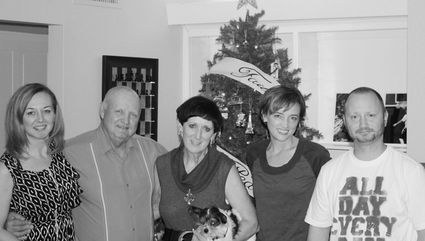 Longtime residents of Green River, the Slaughter family has fond memories of the city.

The Green River of today is a far different place than it was 60 years ago.

What was once a small railroad town, has increased in population by 9,000 since 1950, and the amount of land in Green River has grown exponentially.

Businesses have come and gone, and longtime local families have been joined by a steady stream of newcomers, who are always welcomed with open arms.

The railroad has remained a pivotal part of the community, and the six decades have witnessed the area becoming the "Trona Capital of the World," as well as many booms and busts in energy related fields.

Brad Slaughter was born in 1949, and until 2005, he and his wife made Green River their home. During this time Brad, his wife Nancy, and their three children witnessed not only growth and change, but all the little things that make Green River a great place to raise a family.

While it certainly wasn't an easy to decision to leave, with family members are now located in Arizona and Oregon, they fondly look back at their time in Green River, a place they can always call home.

In the years since they moved, they all find themselves often thinking of a place they love, and their memories paint a picture of a wonderful place.

It perhaps is a unique perspective, a bit different than someone who still calls it home on a daily basis.

These are some of their memories.

Brad married his high school sweetheart Nancy June 27, 1970 and the couple moved into a quaint little house on Railroad Ave.

Much like his parents Dee and Elaine Slaughter, Brad was a hard working man and went to work in the trona mines, where he worked his way up the ladder to a high position.

Growing up, Brad can remember so many of the little businesses that were everywhere in Green River.

Off the top of his head, Brad can remember the Covered Wagon, West End 66 with Russ Cameron and Mike Marino, Joe's Butcher Shop and Joe Gosar, Johnson's Variety Store, Husky Truck Stop and the Tomahawk Drug Store with Lars and Claire Larson and their great carmel sundaes.

Brad recalls Moedels Drug and the Green River Merc and Dell's Market, who would both deliver groceries to homes daily.

He said you could go to the U.P. Depot for small snacks and see Adrian Renyolds running the Green River Star out of a small basement.

When they first were married Nancy said that they would go to the A&W to meet up with their friends and much like Brad, sundaes at the drug store were a big hit, although she thinks that had to do with her not being able to cook.

To Nancy, it was a different era where people also just like to stay home and entertain.

"No one had a lot of money, so you would each bring something like hamburgers or buns," she said. "The kids played together and the adults played cards," she said.

There were plenty of nights at home, but she also remembers just how important the three times a year the trona mines would put on a dance.

"The men wore suits and the women wore evening gowns," Nancy said. "I will never forget how special those nights were. I always felt like a princess."

The two also spent a lot of time watching sports at the old Green River High School, who Nancy said had the biggest gym in the area.

"Everyone went to those games. There was nothing more exciting than cheering against your rivals," she said.

One of Brad's most vivid memories of a social gathering was when dozens of people would stay out front of the Game and Fish building all night to get first choice at the available antelope hunting permits.

From the time she was young, Tara said she and her brother Brad lived on the mountain.

On a visit home a few years ago, Tara said she could still see their names written on Mansface, which just so happened to be right off their backyard.

As a child, Shannon can remember her parents taking her to the Burger A Go Go for soft serve ice cream and that there would always be both high school kids and young families their.

"I also remember going to the Teton when I was young, and that night it burned down I stood with friends on Railroad Ave. and watched," she said.

"Every Saturday morning my mom gave us a dollar to walk down there to buy a donut to watch Saturday afternoon kids," she said.

The Green River Merc was also an important part of Shannon's life.

"I bought almost all my formal dresses from Susan Van Matre and she also helped me plan my wedding. I remember running up and down the ramp between the first and second floor and going to the basement with my dad to buy hunting supplies," she said.

The library was also an important place for the three children.

"When I was little the library was still in the old building," Shannon said. "In the summer we went there in the afternoons and they played movies. I can still smell the books and feel the cool stone floor when I think about it. After the movie they gave us popsicles and we played on the grass under the pine trees while we waited to be picked up."

Much like other kids, Tara spent time at and enjoyed the river.

While she said her mom would never let her near the river, she would not listen and instead spend summer days floating from Jamestown to what is now Stratton-Myers Park.

Tara was also able to experience the beauty of the surrounding, areas, perhaps a little bit early than she should have.

"We stole our parents cars to drive by 14, but because of endless horribly boring hours hunting on White Mountain, we all drove long before it was legal," she said. "I can still drive a standard far better than my city boy husband, because that was what we were taught on. That's the one country thing left in me."

Once she got into high school, Tara said that she and her friends would drive to the Flaming Gorge and all meet at a place they called "The Cliffs."

Also of extreme importance to her and her siblings during the summer was Flaming Gorge Days.

Tara said every year a group of friends would always try to cross the river when it was held at Expedition Island instead of paying at the bridge.

"It was not for a lack of money, it was just to see if we could do it without getting caught," she said.

The family would shop at City Market and Tara also spent countless hours driving between what was than the Mini Mart on Uinta and the old McDonalds until a party place was established.

Much like in any small town, sports played an important role in her life. She was a cheerleader, and her boyfriend Jason Pacheco was the star football player whose game winning kick against Rock Springs is still talked about.

"Most of our lives revolved around football and wrestling," she said. "In a small town those were more important than professional sports," she said. "That is the best part of a small town. Everyone comes together for sports."