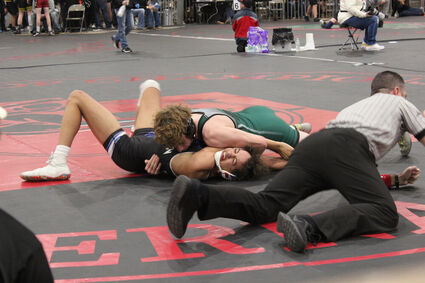 Ryker Mele pins down his opponent at the Tournament of Champions in Vernal, Utah. He is a varsity wrestler in the 132 weight class and finished the tournament with three wins and two losses.

This past Friday and Saturday the Green River High School Wrestling teams split up, with six wrestlers traveling to Fresno, California to compete in the Doc Buchanan Invitational Wrestling Tournament, which is recognized as the toughest high school tournament on the West Coast. According to Head Wrestling Coach Josh Wisniewski, "Boy did it live up to that."

The coach noted that they were able to witness some of the best wrestlers in the country go toe-to-toe, and "our wrestlers were in the mix." The first round of the tournament, according to the coach, was tough for the team as a whole. H...