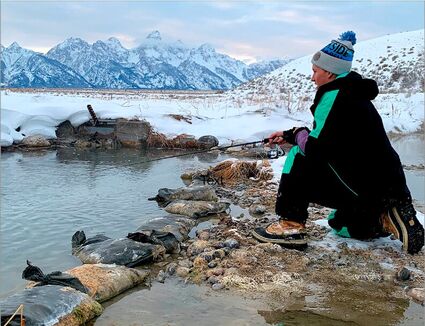 GRAND TETON NATIONAL PARK— It wasn’t AJ Duda’s first brush with angling for goldfish and other former aquarium dwellers within view of the Teton Range.

The Pine Island, Florida teen, visiting Jackson Hole with family, had scouted this unlikely microfishing honey hole during a prior vacation. This time he came prepared.

Armed with a spinning rod rig, line tipped with flies and small jigs, Duda worked the geothermally heated water coursing out of Kelly Warm Springs as it left the small pond.

His quest to hook unwanted exotic aquatic species was successful. Minnow-sized fish relentlessly attacked whatever bait he threw their way.

Duda had his hopes set on hooking one of the brightest orange goldfish that stuck out in the fish swarm.

Those fish were descendants of domestics let loose to live out their days in Grand Teton National Park. The goldfish, along with other invasive species — cichlids, bullfrogs, swordtails, guppies — survived, and thrived, in this heated microenvironment.

Using a piscicide, Teton Park fisheries biologists who prioritize native species have poisoned the 80-degree pond before. The tactic evidently didn’t do the trick. Goldfish and a host of other aquatic invasive species are readily visible to anyone who takes a stroll alongside the roadside attraction in the park’s southeast corner.

Their persistence was no bother to Duda, who’d caught one duller-hued goldfish already and was eager to hook a bright one. They weren’t exactly elusive, but he couldn’t get his flies or jigs to the orange beacons in the water before other species like chubs would intercept them. While his family watched from the warmth of an SUV parked nearby, Duda fished on.