Tale as old as Christmastime 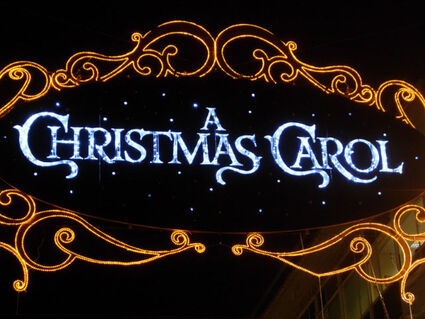 Last weekend I was sitting in the Broadway Theater in Rock Springs, but my heart was transported back to Victorian London. I watched characters I've known for as long as I can remember bring one of my favorite Christmas stories to life once again. Marley's screams gave me goosebumps, I teared up when Tiny Tim said "God bless us, everyone," I sat back in surprise when the Ghost of Christmas Yet to Come loomed over the stage, and I laughed when Scrooge threatened to raise Bob Cratchit's salary.

"A Christmas Carol" has always been one of my very favorite Christmas stories, and I thoroughly enjoyed The Horizon Theater's production of the new musical. The acting and singing from the large cast were impressive. The costumes were gorgeous, and the costumes for the Spirits of Christmas were especially creative. The adaptation was faithful to the book and had enjoyable music. As one of three live stage versions of "A Christmas Carol" I've seen, this production earned its place in my memories. (There are more performances this weekend and I encourage everyone to go see it for themselves!)

While it was written 179 years ago, "A Christmas Carol" has never lost its relevance or appeal, and the classic story of Scrooge's redemption is still being told and retold every year. Even this year, at least two new versions were released, with "Spirited," a modern musical re-imagining starring Will Ferrell and Ryan Reynolds, released in theaters, and "Scrooge: A Christmas Carol," an animated musical version, released on Netflix.

There have been so many versions of this story that there's an entire Wikipedia page just to list the adaptations, including theater, film, television, audio productions like radio and recordings, opera, ballet, graphic novels, parodies, derivative films, and even video games.

I never get tired of the story, and I always enjoy finding fun new versions. While many people have strong opinions about which version is best, I have my own favorites, many of which are not as well-known. Here are some of what I believe are the best and most unique versions:

"Scrooge" (1951): The black and white film starring Alastair Sim as Scrooge is, I believe, the definitively best adaptation ever made. My family watches it every year, usually on Christmas Day, and we've yet to find a version we like more. The adaptation stays closely faithful to the book, the 71-year-old film features impressive visual effects for its time, and I believe it captures the spirit of the characters and story perfectly. (This version can currently be rented or purchased on Amazon Prime or streamed free on Plex.)

"Mickey's Christmas Carol" (1983): This short animated Disney film was probably the first version I ever saw, and I still love watching it. I'm always impressed by how the story is compressed into less than half an hour while still hitting all the major plot points and not losing any of the heart. (This version can currently be streamed on Disney+.)

"The Man Who Invented Christmas" (2017): While this film isn't a direct adaptation, it incorporates many of the characters and goes through the plot as it tells the story of Charles Dickens struggling to write "A Christmas Carol." The way this film offers insights into Dickens' life and mirrors the Christmas story with his own life and experiences is powerful, emotional, and heartwarming. Plus, it has Dan Stevens, who I love. (This film can currently be streamed on Hulu or purchased on other streaming platforms.)

"A Christmas Carol" directed by Jacqui Morris (2021): One of the most unique and creative retellings of the story I've ever seen, this film presents "A Christmas Carol" in the style of a Victorian cardboard toy theater come to life. The story is narrated by a full cast of actors (including some of my favorites, Martin Freeman, Andy Serkis, and Carey Mulligan) while being acted out by a cast of dancers. The script is mostly large passages taken directly from the book, and the choreography and visuals are gorgeous. (This film is currently available on Amazon Prime.)

"A Christmas Carol" the BBC and FX miniseries (2019): I will readily admit this version of the story isn't for everyone. It's a dark, gritty, often disturbing reimagining that follows the classic story while adding new details and diving deeper into the characters. For some, this version might be too dark, ruining the beloved story they know. But for those who are willing to be openminded with the story and characters, it's a masterpiece. It's an especially brilliant character study of Scrooge, exploring why he is the way he is and pondering whether or not he deserves redemption. (This series is currently available on Amazon Prime.)

Doctor Who's "A Christmas Carol" (2010): Last but not least, one of my favorite adaptations of the story is one of the least traditional. While I am a "Doctor Who" fan, I watched this episode on its own before I'd ever seen any other episodes in the classic BBC series, and I fell in love with it on its own merits. This episode is a quirky but touching sci-fi version of the classic story. I first watched it almost exactly 11 years ago (fitting, since it's the 11th Doctor), and I rewatch it every year. This episode also gave me one of my favorite Christmas quotes ever: "On every world, wherever people are, in the deepest part of the winter, at the exact midpoint, everybody stops and turns and hugs. As if to say, 'Well done. Well done, everyone! We're halfway out of the dark.' Back on earth we call this Christmas."