A new version of an old story 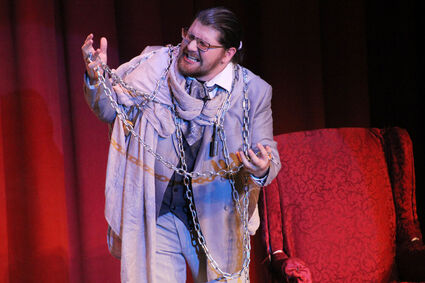 Jacob Marley laments his fate in "A Christmas Carol: A New Musical." Cory Schaeperkoetter, one of the founders of The Horizon Theater, is both playing Marley and directing the production.

While the story of Ebenezer Scrooge's redemption is a well-known Christmas classic, The Horizon Theater's production of "A Christmas Carol: A New Musical" will be both the regional premiere of a new version of the old story and an ambitious undertaking for the new community theater company.

While doing their last show, Cory and Sarah Schaeperkoetter, the husband and wife founders of The Horizon Theater, were already thinking ahead to their next production. They knew they wanted to do a Christmas show, specifically "A Christmas Carol." However, picking the right version...