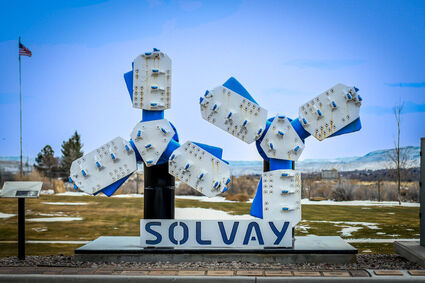 Solvay recently announced plans to resume the construction of its 600 kiloton soda ash capacity expansion in Green River, which was launched in September 2019 and was put on hold due to the pandemic.

Production is expected to start at the end of 2024 in time to meet customers' growing needs for a secure and cost competitive source of supply. This expansion will extend Solvay's position as a global leader, according to a press release.

In addition, a project to deploy a new breakthrough technology to reduce emissions originating from trona mining operations will be implemented, leading to a 20% reduction of the site's greenhouse gas emissions, consistent with Solvay's commitment to decarbonize its operations in line with Solvay One Planet's sustainability roadmap. This innovation will make Solvay the first company to implement regenerative thermal oxidation technology to abate emissions in a trona mine, according to the press release.

"These investments reinforce Solvay's leadership position as a long-term, sustainable global supplier to our customers. I am also particularly proud of the role that our innovation is playing to cut greenhouse gas emissions at our Green River facility in the US – where CO2 emissions currently have no cost – contrary to Europe," said Ilham Kadri, Solvay CEO. "This attractive investment expands our supply of trona-based soda ash and will position the business for superior and responsible growth into the future." The investments total around $200 million and complement the previous investment that secured sole ownership of the natural soda ash operation. The facility, operated solely by Solvay since May 2022, is one of two plants operated by Solvay in the United States. The company operates six other soda ash facilities in Europe and one in Asia. Solvay Soda Ash & Derivatives has 11 industrial sites worldwide, more than 3,200 employees and serves 120 countries.

Solvay carved out its soda ash and derivatives business in last year, creating a separate legal entity for the department.

Solvay One Planet's goal is to achieve carbon neutrality before 2050.

"We believe that Chemistry is the key to the circular economy and by 2030 we aim to have made a significant contribution to preserving our planet's resources," Solvay's One Planet website states. "We will do this by accelerating our transition towards a more sustainable portfolio of products and promoting a circular approach to business, while continuing to reduce our environmental impact on site."