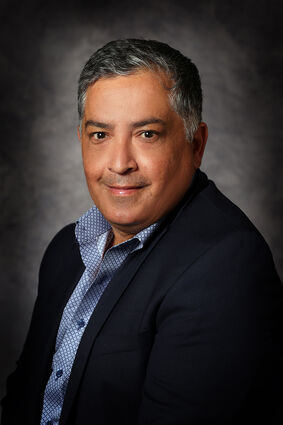 The Sweetwater Dialysis Center's new director brings with him years of experience and a true love for what he does.

"Mr. Rodriguez brings with him years of dialysis experience and expertise in nursing, including management positions," said Chief Nursing Officer Ann Clevenger. "He is new to our area and we look forward to the continued growth and success of the Dialysis Center. Please welcome him to our MHSC family."

Early in his nursing career, Rodriguez worked in an ICU. Not even a year later, he shifted to dialysis, and says he never looked back.

"I don't think I could do anything else," he said. "I never went back to ICU or a medical-surgical unit.

"You get drawn into dialysis. It's like a family," he explained. "You see patients three times a week. You get to know them very well."

At the Dialysis Center, he works closely with Nephrologist Rahul Pawar, M.D., and a staff of 18. Jessica Ice is the department's clinical coordinator. She has worked in dialysis for several years as a dialysis tech, and is now a registered nurse after recently completing a nursing program.

Rodriguez grew up in El Paso, Texas, and earned a Bachelor of Science in Nursing from the University of Texas-El Paso.

He's never lived in a small community like Rock Springs, but says it isn't really that different from a larger city like El Paso.

"Everybody knows everybody," he said. "It's the same in El Paso. If they don't you, they know someone you know. It's really very friendly."

He also finds Sweetwater County a convenient place to live.

"I love the outdoors, and I love to travel," he said. "We're not far from the Wind River Mountains, Yellowstone National Park, Flaming Gorge, Park City, and a lot of other wonderful places."

For more on this and all MHSC has to offer, go to http://www.sweetwatermemorial.com.