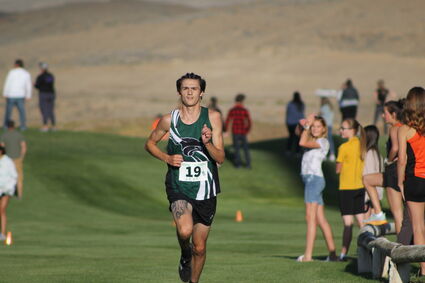 Nathan Stevenson runs during a previous meet in Rock Springs at the White Mountain Golf Course. He received fourth overall at the 3A West Conference meet.

Green River's boys and girls Cross Country teams competed this past week in the 3A West Conference Cross Country meet on a tough course at the Lander Golf and Country Club. Times were down a little as expected, but the competition was tough, also as expected.

For the boys, Green River had seven runners in the field of 109 runners. The top finisher for the boys, as has been the case all season, was Nathan Stevenson. Stevenson was seeded in the top eight prior to the meet but outperformed that rating, coming in fourth overall with a time of 17:26.63 for the 5,000 meter race, which is approximately 3.1 miles.

Head Cross Country Coach Craig Leavitt commented that the girls team is "a really young team and they are learning to deal with the pressure of doing well at the big meets." Leavitt went on to say "It's such a small team that if any of the top five girls falls off or has a bad day things go badly for the whole team." The Coach felt that Nathan Stevenson "sure had a good race," exceeding his ranking going in and "really competing well above expectations."

Next up for the team will be the State Championships to be held October 22 at Wyoming Indian High School in Ethete, Wyoming.