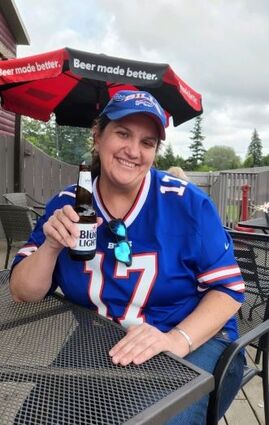 Catherine (Cathy) Ann Cywinski, 43, passed away unexpectedly on Wednesday October 5 at Wyoming Medical Center in Casper. She was a resident of Casper for the past 18 years. She was born on April 20th, 1979 in Rock Springs to the late Donald Cywinski and Patricia Cywinski.

Cathy graduated with the class of 1997 from Green River High School and received her BSW and Master's Degree in social work from the University of Wyoming. Cathy worked for 16 years at Central Wyoming Counseling Center where she devoted her time to the community by helping individuals in need. After working at CWCC for many years, she decided to start a new adventure and joined the team at U.S. Renal Care. She immediately felt at home and considered them her work family.

Like her dad, Cathy believed in the 4 F's: faith, family, friends, and football. She would do anything for anyone, no questions asked, she would be there. Her smile lit up every room she was in and her laugh was contagious. Her father also gave her an undying love for the Buffalo Bills. On September 19th Cathy fulfilled a lifelong dream of attending a Buffalo Bills game in Buffalo, New York.

Cathy had one of the kindest hearts of anyone. Her empathy for others left a deep impact on all those she came into contact with. As a social worker Cathy advocated for those who didn't have a voice, fought for those who couldn't and gave everything she could to make a difference in the community.

Cathy is survived by her mother Pat Cywinski and sisters Mary Ebinger (Mark) and Susie Griffin (Ray Pacheco). She is also survived by her nieces and nephews Raeanne Ebinger, Megan Griffin, Madison Griffin, Elijah Pacheco and Tyler Pacheco. These five children were the light of her life. She treated them all as if they were her own and would attend every vacation, play, basketball game, golf tournament, graduation and holiday. She is also survived by several cousins, aunts and uncles. Cathy was also grateful to her former brother-in-law Todd Griffin, who helped her with many things. It goes without saying that Cathy had many friends that she considered family. Her friends were deeply important to her and she loved them immensely.

Cathy was preceded in death by her paternal grandmother (Marie Cywinski) and father (Donald Cywinski).

In lieu of flowers the family is requesting donations be made to U.S. Renal Care - Casper Dialysis.

Arrangements are under the direction of Newcomer Casper Chapel. To leave a special message for the family, please visit http://www.NewcomerCasper.com.