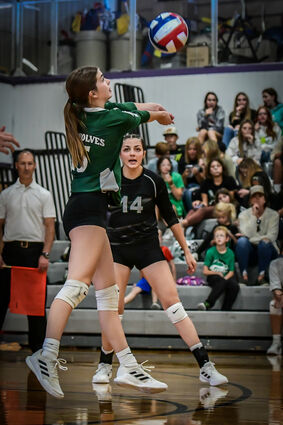 Abigail Fuss passes the ball during a home game against Jackson.

The Green River Wolves Volleyball team traveled to Evanston and won 3 of the 4 games on Thursday, September 22. Coach Jessica Demaret feels the girls came out against Evanston ready to play and were in control of the match most of the time. "They did take the 3rd set from us, but the girls bounced back well and were able to finish it in the 4th set.  It was a fun night, Evanston is a hard gym to play in so to go on the road and get that win says something about our girls hard work and effort.", said Demaret. Brinley Nelson had a great night for Green River with 14 kills and 10 digs.  Abigail Fuss was also great in the back row for the Wolves coming up with 22 digs and 2 serve aces. 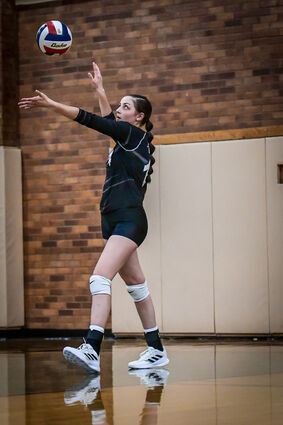 Brinley Nelson serves the ball during a home game on Saturday.

The Lady Wolves played Jackson at home and took a loss on Friday, September 23. Demaret feels the girls came out a little sluggish against Jackson on Friday. "Homecoming week was a busy one with all of the extra activities and we had been on the road in Evanston the night before.", she said. "There was still some really good things that came out of that match even though it ended up in a loss, our serve receive and serving was still good which those are two things we really stress so we were happy about that.  We are excited to get a chance to play Jackson again next month, we feel like that is a team we can compete with and win against.", she said.

Demaret added, "We were very excited with all of the support Green River is giving the volleyball program, we had great crowds in Evanston and at home on Friday.  We are looking forward to all of our home games coming up in October to play in front of our home crowd."