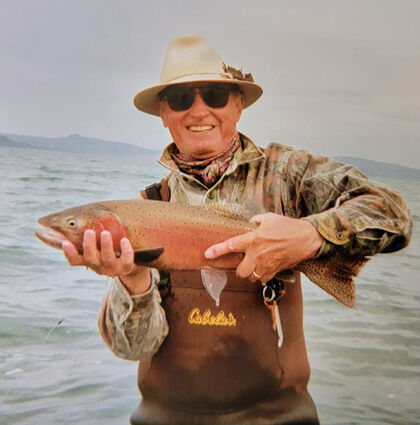 Robert E. Johnson, 86, passed away on Tuesday, September 20, 2022, at Sage View Care Center in Rock Springs, Wyoming. Bob was a longtime resident of Rock Springs and a former resident of Bakersfield, California. He died following a lengthy illness.

Bob was born March 18, 1936, in Rock Springs, Wyoming; the son of Nester Johnson and Hulda Jacobson.

He attended school in Rock Springs and was a 1955 graduate of Rock Springs High School. Bob received his Bachelor’s Degree as a Civil Engineer from the University of Wyoming.

He married his soulmate, Mary Etcheverry, on November 27, 1981, in Jackson, Wyoming.

Bob worked for JFC Engineers and Surveyors as a Civil Engineer for 28 years having retired in 2005. He was the President of the Corporation for several years.

He was a member of the Wyoming Engineering Society.

Bob enjoyed: family, storytelling, fishing, hunting, hiking, skiing, tennis, and photography. Bob was a Master Yodeler who never missed an opportunity to show off his talent. He was also an expert in tying flies. He was the creator of the H.O.G. fly which was irresistible to all fish.

He was preceded in death by his parents; two brothers: Carl Johnson and Larry Johnson; sister Ruth Hokanson and her husband Cliff; sister-in-law, Harriet Johnson.