Wolves hit the road for first away game against Worland 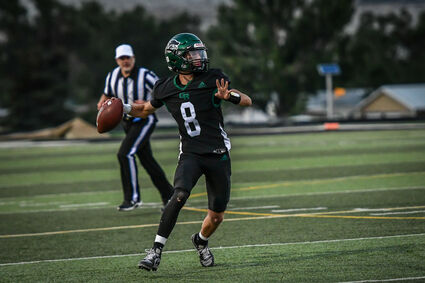 Quarterback Caleb Lake gets ready to throw a pass during a home game in Green River last week.

After starting the season with three straight home games, including a 48-0 win over Rawlins, the Green River High School Wolves football team traveled north to take on the Worland Warriors in their annual homecoming game.

Worland kicked off to the Wolves, who started with a 23-yard pass completion from senior quarterback Caleb Lake to fellow senior Jackson Mitchell. Several runs by Bracken Miller and the Wolves were moving the ball, with their offensive lines providing some good blocking, but the drive stalled and the Wolves had to punt the ball. The Warriors moved the ball on a couple...