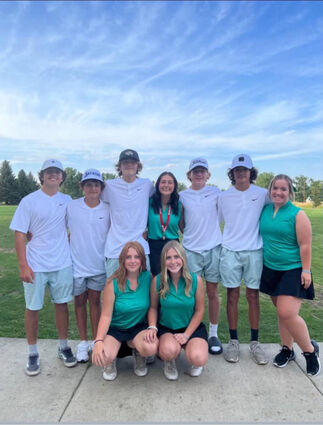 The GRHS Golf team has finished the fall season.

"We didn't leave with the results we wanted, but we definitely left with some great memories and lessons learned," Assistant Coach Danielle Salas said.

The Buffalo Golf Club is known for playing hard, Salas said, which the coaching staff tried to stress to the team members.

"Hole number 17 is one of the most 'bogeyed' holes on any golf course in the state, and Buffalo definitely lived up to its reputation," she explained.

The coaches also warned the team not to underestimate the weather in the postseason - a warning that became more real when the players had to wait through an hour and a half lightning delay on day one, and when Freshman Mylie Mele and Sophomore Taylor Jenny had to finish their rounds in the rain.

"It actually ended up being a really great experience for our team, because as an entire team we were able to walk with umbrellas and follow the girls for their last few holes, cheering them on," Salas said. "In fact Mylie got her first tournament birdie in front of her entire team."

Day one ended with Senior Ryker Mele only eight strokes out of All State contention, coming in with an 89. Sophomore Taylor Jenny was in the top 20, coming in right at 20th with a 110, and Junior Isabell Salas was tied for first place and seemed to be headed toward a State Championship title, shooting an impressive 76, going one under on the back nine.

Day two saw Senior Ryker Mele, Sophomore Kaleb Gunter and Freshman Mylie Mele all improve from day one. Mylie Mele improved by a "whopping" 11 strokes, which is nearly unheard of at State, according to Coach Salas.

"We are very excited to see what the future holds for our girls team as they actually finished better as a team than we expected, coming in at seventh place," Salas said.

The boys team, on the other hand, had a harder time at State than expected.

"Sometimes it's a bad day to have a bad day, and that was definitely the case for our boys team, who battled colds and flus leading up to State," Salas explained. "They battled through not feeling well, some fatigue and definitely some big nerves, and as a coaching staff we couldn't ask for more. We know that there is much more success ahead for these gentlemen."

It was a bittersweet weekend for the team's lone senior Ryker Mele, who gave it his all, Salas said, coming in the top 20 right at 19th place. This was Ryker's best ever finish at State, as well as his best season as a GRHS golfer. He was in a top 10 medaling position in three out of four regular season tournaments, placing third at Conference and taking All Conference Honors for a second time.

"He came to us as a Freshman who had never golfed shooting a 138/142 at his first State competition to an accomplished golfer who is being recruited by several JUCO programs," Coach Salas said.

It was also a bittersweet weekend for Junior Isabell Salas, who missed a State Championship title by two strokes, with the competition literally coming down to the last hole.

"Many people will look and see the words 'runner up' and 'second place,' but what they won't truly understand is that it was a battle for all 36 holes," Coach Salas said.

Despite narrowly missing the championship title, Salas had an impressive weekend and season. She was the team's only All-State recipient. This was also her third time as an All-State honoree, which is a record for GRHS golf. Isabell also took first place medalist honors in every tournament she played in and second at Conference. Throughout the regular season, she often shot the lowest round of the tournament for both the girls and boys, never shooting a score higher than 78. Isabell will head toward her Senior season being recruited by several DI and DII programs, according to Coach Salas.

"Overall the 2022 season was a success on many different levels," Coach Salas said. "It was really important for our newer golfers to have gotten out there and played in some tournaments, because ultimately the experience matters. For our veteran golfers, each tournament helps develop those skill sets they've built over the past few seasons. We definitely have a list of things that we need to refine during our Spring season, which we always look forward to as a building and technical season because it's a little less competitive." 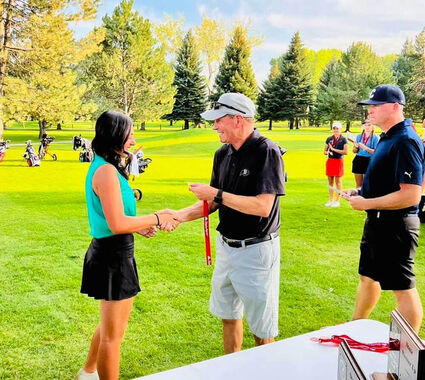 Isabell Salas receives her All-State medal in Buffalo, Wyoming at the 3A State Golf.