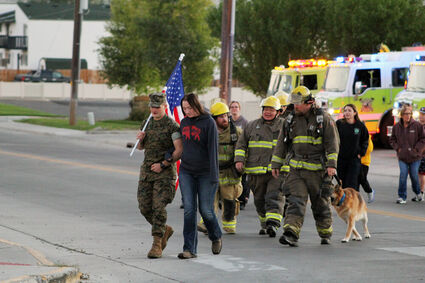 Bruce King and Elyssa Byers carry an American flag as they lead the 9/11 Memorial Walk in Green River Sunday morning.

The communities of Green River and Rock Springs, led by the firefighting forces in each city, are working to ensure Sweetwater County never forgets the horrors of 9/11 or stops honoring those who lost their lives and those who survived.

This year, both cities held memorial walks and ceremonies on Sunday, the 21st anniversary of the September 11, 2001 terrorist attacks in New York City. Green River's event was the first annual memorial walk for the city, while Rock Springs hosted a walk and a memorial ceremony with special speaker Lizzie Medici, retired New York firefighter and 9/11 survivo...