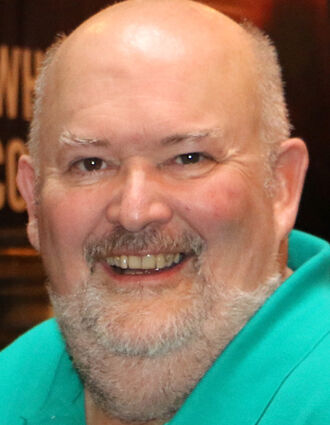 Born in Spokane, Washington, on May 29, 1958, he was raised by his parents, Carol and Darrel Dean Angell, who were wheat farmers in Walla Walla, Washington. He was an only child.

Angell graduated from Walla Walla High School in 1976 and earned his bachelor's degree in journalism from Washington State University in 1981.

He worked as a reporter at the Tri-City Herald in Kennewick, Washington for several years, where he made friendships that would last the rest of his life.

He moved to Cheyenne in 1985 to take a job with the Associated Press, where he worked until 1998.

He began dating Mary Shannon, then a reporter for the Wyoming Eagle, during the 1989 Wyoming legislative session, and the two were married on May 5, 1990. Their daughter Amanda was born in 1997.

Angell was a devoted and loving father to his only child, Amanda. He taught her to play video games, look for unbiased facts in the news and never be ashamed to be herself. Angell was pleased to welcome into the family Tanner Carroll, Amanda's husband-to-be, and he frequently enjoyed losing to him in video games.

Angell became the executive director of the Wyoming Press Association in 1998. A stalwart champion of government transparency, he lobbied the legislature to ensure open government and educated reporters and elected officials on Wyoming's open meetings and public records law. In 2019, he received from the WPA the Milton Chilcott Award for his "extraordinary efforts to defend access to public information."

Known for his integrity, Angell was dedicated to the Wyoming news industry and very fond of the people across the state who are part of it. His unfailing sense of humor, carefree approach toward life and love of fun made him many friends.

As WPA director, Angell planned conventions for the state's newspaper people. He not only scheduled workshops and social functions but also wrapped up each convention by leading a jam session with his fellow journalists, encouraging everyone to sing along until late into the night.

As a guitarist and singer/songwriter, Angell played in five bands in Cheyenne: Jammin' Easy, Musical Chairs, Bridge Too Far, No Particular Reason and Another Round. He and his wife were co-founders of the Cheyenne Celtic Festival, which began in 2005. They also led children's worship at Calvary Chapel in Cheyenne from 2014 until Angell became ill.

In 2017, the Angells formed the Wyoming News Exchange, a cooperative service for the state's newspapers that continues today.

Following his retirement from the WPA in 2018, Angell helped to found the Cowboy State Daily, an online news source, in 2019 and worked as its managing editor until his illness.

Angell and his wife visited Ireland twice, and he fell in love with the country's culture - particularly its music - and its warm, welcoming people.

During the last few years of his life, Angell grew out his beard and donned a red suit for his "seasonal work" during the Christmas season. He was well-suited for the job. Children who visited Santa were often treated to a chorus of "Jingle Bells", and parents as well as children were entertained by his witty banter.

He was preceded in death by his parents and by Jeff "Kong" Shields of Walla Walla, Washington, a close family friend whom Angell considered a brother. He is survived by his wife and daughter.

Arrangements for a celebration of life are pending but will be held in Cheyenne most likely the first part of November. When finalized, details will be posted on schradercares.com.