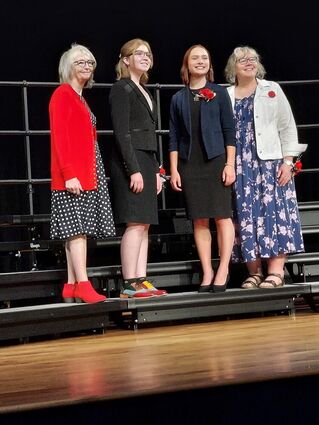 Faith Duncan of Green River attended this year's Wyoming Girls State session. During the session, she was elected to multiple positions and received other awards and achievements.

Duncan, the only delegate representing Green River, was in the City of Meadowlark. She was elected to City Police Officer, Senate Chief Clerk, Senate Committee Chairman and U.S. Senator. She was also the Wyoming Girls State Memorial Scholarship winner.

The 79th session of American Legion Auxiliary Wyoming Girls State was held on the campus of Laramie County Community College in Cheyenne June 4-11.

"The Girls State program emphasizes the importance of government in modern life and educates young women in the duties, privileges, rights, and responsibilities of American Citizenship," a press release states. "It awakens a sincere conviction that a well-informed, intelligent, participating citizenry is vital to protect and preserve our American institutions and our democracy. These goals are achieved by actual participation in a simulation of the political and governmental process."

Upon arrival to the program, delegates are assigned to "cities," where they live during their residence at Girls State, the press release explains.

During the program, which is operated in accordance with the basic laws of the State of Wyoming, delegates elect their own city, county and state officials and learn the duties of the various offices. They also introduce and pass their own bills in the Girls State legislature, make and enforce ordinances regulating their cities;and manage their own police force to administer justice.

"Every student holds a definite, integral role in the functions of Girls State," the press release said.

The program also invites guest speakers including government officials, community leaders, military members and veterans who present their perspectives on processes and operations.

"Girls State offers a myriad of opportunities to experience government first-hand as a citizen, as a voter, as a candidate, as an official, as a policy maker, and as a friend," the press release said.