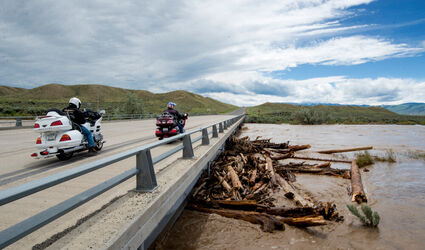 Debris washed up along a bridge near Clark as water continued to rise, threatening the bridge. The Wyoming Department of Transportation may attempt drilling a large hole in the bridge to relieve pressure and save the structure.

POWELL - Unprecedented rain, combined with fast melting late season snow, has flooded nearby communities and forced the closure and evacuation of Yellowstone National Park and nearby attractions.

Visitors in Yellowstone National Park were being evacuated Monday, as several roads in the park were closed due to substantial flooding, rockslides and mudslides from the recent unprecedented amounts of rainfall. At 10:45 a.m. Monday, the park closed all entrances to inbound traffic due to hazardous conditions inside the park - a first in decades, if ever, for the park. "

Due to record flooding ev...