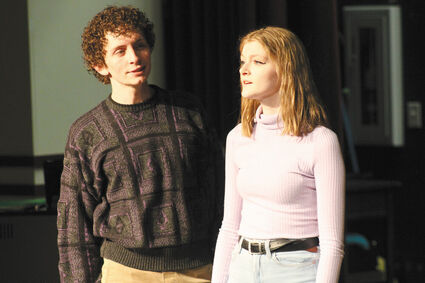 Kenneth Starling and Sarah Schaeperkoetter sing the duet "Once Upon Another Time" from the Andrew Lloyd Webber musical "Love Never Dies" during rehearsal for The Horizon Theater's debut performance, "A Dreamer's Showcase."

The Horizon Theater is a brand new community theater group in Sweetwater County whose debut performance will be "A Dreamer's Showcase," a performance of songs by Andrew Lloyd Webber, with four performances next weekend.

The husband and wife team of Sarah and Cory Schaeperkoetter are the founders of the The Horizon Theater. Sarah grew up in Green River and was active in theater from a young age. Cory grew up in Rock Springs and got involved in theater in high school. The two eventually met and fell in love through the theater program at Western Wyoming Community College.