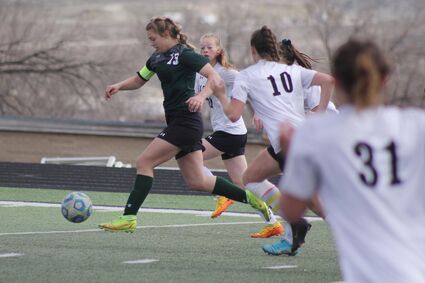 Lady Wolves player Ellie Kettering rushes ahead of players from Natrona County to maintain control of the ball during action Saturday morning at Wolves Stadium.

Kelly Walsh and Natrona County were the Lady Wolves' opponents last Friday and Saturday, and were the top two of the top five conference teams when Green River faced them.

In Friday's game against Kelly Walsh, the Lady Wolves held their opponents to only one point up until halftime. However, the Trojans were able to make three quick goals in the second half and another goal close to the end, ultimately beating Green River 5-0.

The Lady Wolves fought against Natrona County Saturday and were up 1-0 for the first 30 minutes. More challenges came later in the game, including a moment when a player got hurt and the referee didn't stop the play, which distracted the other team members, according to Robles.

"We played really hard the second half and then gave up a goal in the last few minutes when we were trying to tie the game up," Robles said.

"We played well," Robles said of last week's games. "We still run into the same issue where we have five or 10 minutes where we're giving the games away to other teams. We just need to clean that up."

Despite the losses, Robles believes the Lady Wolves are capable of competing with the top teams in the state.

"I think we're there," he said. "I think the hard part right now is just getting those girls to believe we can finish out a game."

The Lady Wolves will have more chances to work on finishing games this week when they start their away games of the season.

"All of our games from here on out are on the road," Robles explained.

Green River will take on Star Valley this afternoon, then face Jackson Hole Saturday. The Lady Wolves have already faced both teams once at home, where they beat Star Valley and lost to Jackson Hole. Robles anticipates this week's match with Jackson will be difficult, but hopes for a better result this time.

"That's another tough game on Saturday, but we played Jackson here and we played them tough, so hopefully we'll play them tough there," Robles said.