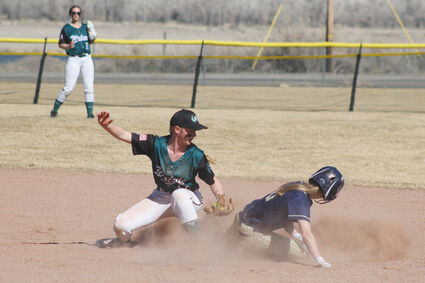 Madi Yoak makes sure a player from Cody wasn't fast enough to take second base during the first of two games the Lady Wolves played during Friday's double header.

After hard losses to Cody last Friday, the Green River High School softball team came back strong when facing Worland the next day.

"We got spanked by Cody," Coach Blaire Aimone admitted. "It was not a good outing."

The Cody Fillies had 21 hits and three home runs in the first match, which was the conference game, and ended up beating the Lady Wolves 17-4. In the second match of the day, Green River started out leading 6-1, but the Fillies scored 15 runs over the next two innings, ultimately winning 19-8.

Aimone believes a large factor in the loss was the mental aspect of the game. For o...