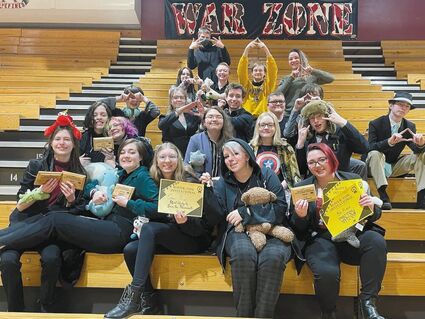 The Green River High School speech and debate team celebrates after returning from the Riverton tournament Feb. 19. During the tournament, two team members got to semifinals and 10 students made it to finals, with several students finishing in the top three in their events.

After only being able to compete virtually due to the COVID-19 pandemic the last two seasons, the Green River High School speech and debate team has come back strong this year, competing in tournaments across the state and working hard to be one of the best 3A schools.

"The season's been really fun," Mia Worrell, one of the team captains, said. "It's really good to be back in person finally."

Abby Mattson, another team captain, said being back in person has been one of the team's biggest challenges, especially with having to transition away from the online format and go through a different learning process. Worrell also said competing in person again was a lot to take in at first.

"It was just so much emotion, so much energy in one room," she explained. "But it's really good to bond with people in person in between rounds and just be able to make friends that way."

The team has been able to both see old friends and make new friends as they've traveled to the various tournaments, Worrell said, and facing new schools and seeing the competition across the state has been a good challenge. It's also been challenging to go up against several larger teams, including teams from schools that have speech and debate classes, while Green River's program is all extracurricular.

"Our biggest problem is we're such a small team," Worrell explained. "But we do have a lot of talent."

Mattson agreed the team has been doing well this season, especially for having so many young and relatively inexperienced members.

"A lot of people are learning a lot of new things," she said.

While having a smaller team is a challenge, it's also one of Green River's strengths.

"Because we're small, we're really connected and we're really bonded as a team and we have each other's backs no matter what," Worrell explained.

"We just all get along really well," Mattson agreed. "We've made it fun."

Having fun and finding a close-knit community with the speech and debate team has definitely been the experience of Kaylee Noyes. Noyes joined speech and debate for the first time last year when the tournaments were virtual, and has come in again for the second part of the season this year, catching up with the team after having been involved in theater. Noyes competes in Lincoln Douglas Debate, which focuses on ethics, and does Original Oratory, where contestants write a seven to 10 minute speech on a topic of their choice to educate or persuade the judges.

"I'm definitely finding my footing here and I really like it," Noyes said.

While she already considered herself an eloquent speaker, Noyes is grateful for the ways participating in speech and debate helps with public speaking and people skills.

"You get very used to performing in front of people and connecting with an audience," she explained. "It's just a lot easier to put yourself out there, and I've found that it makes me more educated and makes me less afraid to talk about what I believe in."

Having found so much personal success through speech and debate, Noyes is excited to share its benefits with others. She has loved seeing new kids whose eyes light up when they join the team and do well, and she had a friend who was going through negative experiences in other parts of the school and was able to have the courage to leave and find a better environment with the speech and debate team.

"I'm so looking forward to teaching the next generation of speech and debate kids that they can find their voice here," Noyes said. "I love winning, don't get me wrong," she added with a laugh. "But for me, I really love seeing kids that were in my place and teaching them how to be the best that they can be through this."

As the team has grown closer and found support with one another throughout this season, they've also had a number of successes. The Green River team has come in second among the 3A schools at several tournaments, including the Jackson Hole Tournament, the Camel Classic Tournament in Gillette and the Greybull Tournament last weekend.

The team has one more regular tournament this weekend in Worland before facing state next week and the national qualifying event the week after.

Going in to state, Worrell and Mattson are hopeful for Green River's chances as long as the team members try their hardest.

Mattson said everyone needs to go in with the correct attitude and, despite whatever may have happened in the past, just do their best with each new round.

"We just need to have the best mentality we can," Worrell said. "We can't be putting ourselves down, because that's going to affect our performance. And we just need to know that we are putting our hearts out every performance and we're doing everything we can to do the best we can every single time we stand up."