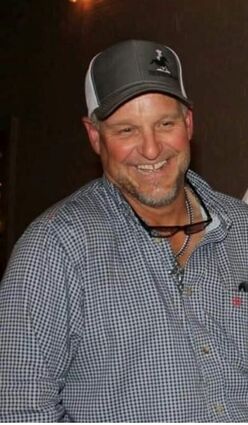 John Andrew Hodges, 49, passed away November 19, 2021 after a brief stay at Salem Health in Salem, Oregon. John, the son of Eldon and Shelia Hodges was born in West Plains, Missouri but grew up in Eden Valley, Wyoming attending schools in Farson and Green River, Wyoming.

John's passions were hunting and fishing in the great outdoors with his greatly extended family and friends. Other loves were all the ladies and kids in his life along with motorcycles and always his dogs. John loved a camp fire, lots of stories, a good laugh and a good party. He spent most of his adult life working in construction and the oil fields. His favorite oil field station was in Alaska. His favorite fishing hole was on the Clarks River near Cody, Wyoming where he usually had a kid and a dog or two in tow.

John is survived by his sister Jenny (George) Gaviotis of Rock Springs, Wyoming, his half-sister Edie White of Garden Grove, California. His first wife Kristina Hughes and daughters Kaylee Hughes and Samantha (Chris) Bryson of Rock Springs, Wyoming, his longtime companion Erica Rushin and three children Ryan (Kristen) Goodwin of Laurel, Montana, Melissa Crokin and Krystal Rushin of Casper, Wyoming; his second wife Jen Bell and daughter Sami (Sawyer) Coggins of Meeteetse, Wyoming; his daughter Jessica Long of Farson, Wyoming, Grandchildren Brindley Goodwin, Jaxton Bryson, Alex Long, Bryer and Steele Coggins along with several aunts, an uncle, several cousins, nieces, nephews and too many friends to count. All will miss his hearty laugh, charming smile and his willingness to take any one fishing with him.

John requested that upon his passing his body would serve as an organ donor, followed by cremation. He also requested that no services be held but wished that his family and his friends have a steak, drink a beer and recall their favorite adventures that they had with him.

The family respectfully request that any donations be made in John's name to Holy Trinity Greek Orthodox Church, P.O. Box 14, Rock Springs, Wyoming 82902 (note) John was named after his maternal great grandfather John Andrews who was a member of Holy Trinity)