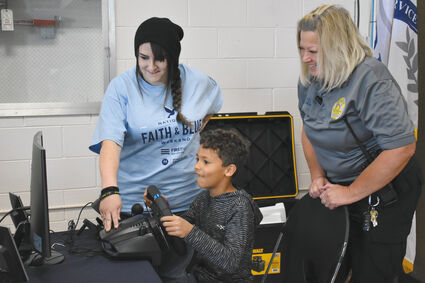 David Shafe tries out a driving simulator at the Green River Police Department's table during the "Faith and Blue: A Community Conversation" event while Taylor Frint and Animal Control Officer Jill Wilson watch.

Although Sweetwater County is a small community, it's not immune to feeling the effects of national unrest - such as the tensions between law enforcement and the public that have come to the forefront over the past year and a half. This is why the county's law enforcement agencies hosted the "Faith and Blue: A Community Conversation" as an opportunity to connect with the community.

An open house event and dinner took place at the Sweetwater Events Complex Sunday. This was the second year local law enforcement agencies have observed National Faith and Blue Weekend.

Green River Police Chief Tom Jarvie said the Faith and Blue Weekend began last year after the death of George Floyd in Minneapolis. A pastor in Georgia who works with the One Congregation One Precinct initiative (OneCOP) believed there was a need to create a national movement to connect police with the public. Sweetwater County law enforcement leaders heard about the initiative last year through the Wyoming Association of Sheriffs and Chiefs of Police and wanted to be a part of it. They hosted a food drive as an initial way to reach out to and work together with the faith community.

This year, they wanted to make the local observation of Faith and Blue Weekend a little larger and better, Jarvie said, so the departments partnered with members of the faith community to organize the "Community Conversation" event.

The main goal of the event was to provide an opportunity for law enforcement to be accessible to the community and approachable in a relaxed environment and to have conversations and make connections, according to both Jarvie and Rock Springs Police Chief Dwane Pacheco. Pachecho said he hoped the event would show that law enforcement members are just people.

"We're just an extension of our community partners, every single one of us," Grossnickle said. "Yes, we put on the uniform and the tools to do our job, and it's an honorable job, but we are members of the community. We're all human. And events like this allow everybody to communicate with us and foster those relationships and understand who the men and women are that are out there serving them every day."

Despite the fact that Sweetwater County is generally a smaller, more tight-knit community that often doesn't have the same demographics as metropolitan cities or face the same challenges, Pacheco said that local officers are currently hearing and feeling the "bleed-over" of national tensions.

"This year I've felt the stress and challenges that our officers are dealing with on a daily basis from those national issues," Pacheco told the crowd at the event. "It's probably the first time in 31 years that I've felt that on the local level."

Pacheco has personally noticed some differences in the way law enforcement is treated. He discussed two incidents when either he or one of his officers was accused of harassing people when they were just following normal procedures.

"It was mind boggling to think that the job that we do is construed as harassment," Pacheco said.

Jarvie added that over the past few years "you see our country polarizing," which can be seen in peoples' perception of and response to law enforcement.

"We have people who are being more vocally supportive and bringing food - I always say trying to kill our officers with diabetes," Jarvie said with a laugh before getting serious again. "They feel bad for officers being blamed for every one of society's problems and they are really showing that. And then there's the group that are just pulling farther and farther away because they are having mistrust built in their minds over things that don't necessarily happen here."

Events like "Faith and Blue: A Community Conversation" are important because they give the public a chance to build relationships with law enforcement and ask questions in a relaxed environment, according to Jarvie.

Pachecho also pointed out the importance of bringing the community together to have conversations before a tragedy happens and before negativity escalates.

"Whenever there is a problem or a conflict, we need to get together and talk about it and discuss it," Jarvie added. Pacheco agreed, saying that local law enforcement officers are approachable and accessible. Jarvie also noted that everyone is welcome to come to law enforcement with their concerns.

"No matter if you've made decisions in your life that brought you to adverse contact with law enforcement for a long period of time, don't think because of that we're not going to listen to you," Jarvie said. "That's part of the divide that gets created that just keeps festering. To think that we don't value your insight, regardless of what decisions you've made before, or who you are, or where you come from - just know that we're here for our community. That's all of our community, that's everybody in our community. Realize that and come talk to us."

Jarvie and Pacheco both stressed that the relationship between the community and law enforcement, who are members of and a reflection of the community, needs to be a partnership. Part of the goal of Faith and Blue is to build this partnership by connecting with local churches.

Pacheco said this partnership is powerful because "our faith-based communities are pillars of our community, as are law enforcement," adding that "if you can get those people together, it's really going to permeate throughout the community."

Jarvie noted that he recognized the importance of cities and the faith-based community working together after the Ferguson protests in Missouri in 2014. Looking at what happened in that event, Jarvie believed the problem had built up between officials and the community over a long period of time.

"And that was apparent to me all the way here in Wyoming when the first protests started when I saw faith-based leaders as part of those protests," Jarvie said. "It made me think, how out of touch do you have to be with your community as a police department to have faith-based organizations coming out against you? So that's something that I paid attention to ever since."

He noted that if you don't at least have good relationships between officials and the community, you can't aim higher. That connection is the minimum bar to reach.

Going forward, Jarvie and Pacheco hope to not only build on the partnership established with the faith-based community, but to continue to connect and partner with all the members of the community they serve.