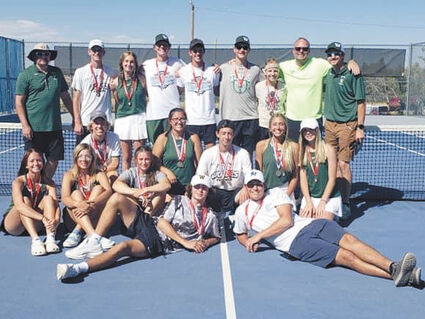 The Green River High School tennis teams show off their hardware after regionals. Each member of the team medaled at the event and gave themselves great starting seeds at the state tennis tournament.

With three All-State mentions and a boys team that looks to be ready to compete for a state title, head tennis coach Phil Harder says he's feeling motivated after the state tournament.

The tennis teams traveled to Gillette to compete at the tournament, with the boys finishing sixth overall and the girls taking fifth.

For the boys, Braxton Cordova, who plays Singles No. 1 took fourth at the tournament, earning All-State in the effort. Singles No. 2 player Korbin Arnell was knocked out of the tournament in the semifinals of the consolation bracket. For the doubles teams, Zach Friel and Taylon...