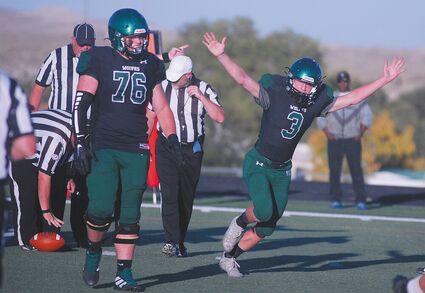 Jacob Schieve celebrates taking the ball from the Red Devils early in the first quarter.

The Wolves took another loss Friday night as the Evanston Red Devils held them to only one touchdown during Green River’s homecoming game, winning it 27-7.

While the Wolves’ previous outing with the Worland Warriors was a high-scoring contest, Green River’s meeting with Evanston was more defensive as both teams initially struggled to find the end zone.

The Wolves were the first to receive, but were forced to punt as they sized up the Evanston defense. Evanston’s first possession of the game nearly led to a touchdown, but a Red Devil fumble at the goal line recovered by senior Jacob...