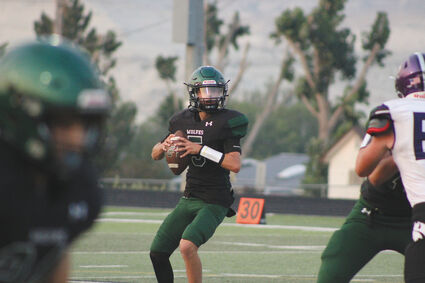 Braden Morrell looks for an open receiver during previous action with Mountain View during the football jamboree at Wolves Stadium. The Wolves played the first game of their season Friday, resulting in a 43-12 loss.

The Wolves hit the road Friday to play a tough Lander squad and taking their first loss of the season. The Lander Tigers have made the playoffs the last couple of years and started with the home field advantage and one game under their belts: a 51-6 domination of Pinedale.