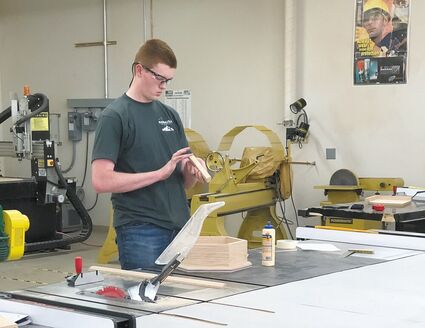 Cole Murray works on his project for the national Skills USA competition in the woods workshop at Green River High School. Murray placed third in the nation for his work.

A Green River High School student took third in a national Skills USA cabinet competition, earning the highest place anyone from Green River has achieved in the Skills USA program.

Cole Murray competed June 9 in the national competition for Skills USA, building a hexagonal cabinet that woods teacher Tim Cassity described as a simple-looking, but complex project. The event was hosted virtually, allowing Murray to build his project at GRHS, but required him to be filmed during the six-hour work period. Despite the time given, Cassity said Murray finished his project early, but made a quality...