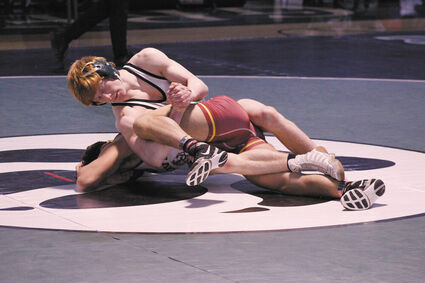 Conner Todd gains the upper hand on his opponent from Star Valley Friday night. The night didn't go in the Wolves' favor, resulting in a 50-12 loss, but the team plans to stand tall in the coming week of competition.

The Wolves are dusting themselves off following a 50-12 loss to Star Valley at home Friday evening.

Early on, the Wolves fell behind as the individual losses mounted, resulting in Green River being down 30-0. Head coach Josh Wisniewski credited the Star Valley Braves with being a very tough and consistent team, but doesn't think the Wolves came out as hard as they should have.

"We could have wrestled a lot better, it's hard to compete in a dual when you go down 30 points," he said.

Wisniewski said the team still has improvements to make before Regionals start and said they will have a lot o...