Protesting the slaughter of pigs 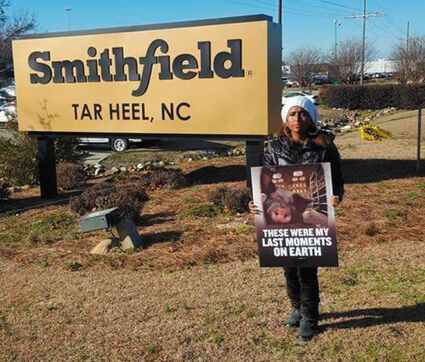 Rock Springs resident Madhu Anderson holds a sign protesting the treatment of pigs outside of a pork processing facility.

"Hey, I am going to the lake, what about you," says seven-year-old Bella, a black lab mix, as she pokes her head out of a car window at a stop light on a warm sunny day in Rock Springs.

"What's a lake? Maybe I am going to the lake too," replies six-month-old Charlie, a pig who struggles to reach his snout out through a small opening in an overcrowded transport truck. The truck carries two hundred pigs en route to slaughter.

My heart was filled with joy when I read the press release in the Rocket-Miner, on Dec. 21, 2020, part of it stated "with changing times Rock Springs Animal Control has found more humane ways to tackle animal overpopulation and can do so without the use of Carbon Monoxide." Removal of the gas chamber from our city shelter shows that gas chambers are certainly inhumane. That's the reason they are banned in most states in city animal shelters. Surprisingly, thousands of pigs are put into gas chambers in the U.S. every day as a standard industry practice.

So, in February of 2019, unlike most people in Rock Springs, I chose to spend six hours outside the Smithfield Pig Packing Plant (a pig slaughterhouse) in Tar Heel, North Carolina. I watched several dozen transport trucks carrying approximately 200 pigs each, aged between four and six months, entering the facility. The average slaughter age of a pig is six months, while in nature pigs can live up to 15 years. This place kills more than 35,000 pigs a day. I learned every single one of the pigs I saw that day were walked into an enclosed platform, and lowered into a chamber filled with Carbon dioxide gas. Once inside, the pigs scream, panic and desperately try to escape. The gas causes significant distress and pain to them ("Dominion" documentary, in which activist successfully placed hidden cameras in a commercial gas chamber at a hog packing facility). This system, a standard industry practice, is used as a stunning system, which often fails due to human error, or high-speed slaughter lines. As a result, some pigs may be fully conscious during the whole slaughter process-from insertion of a knife into the thoracic cavity, to submersion into scalding water.

Some people may argue by saying these pigs are raised for "food;" It's a part of circle of life; pigs are put on the earth for us; where do I get my protein from; pigs are not pets they are "food;" it's our culture and tradition; I love my bacon, and so on. Regardless of these popular comments and thoughts, putting baby pigs into gas chambers cannot be justified.

Some say pigs are smarter than dogs, and can be easily trained. Pigs can be affectionate just like our dogs, they just look different than dogs. Maybe I deserve to be treated differently, too, because I look different than most people in Rock Springs owing to my origin and the color of my skin.

I wish we were not forced into societal or cultural norms. Maybe a world free from all discriminations based on species, breeds, gender, race, ethnicity and skin color is possible-where instead of being walked into inhumane gas chamber, baby pigs like Charlie may go to the lake with dogs, like Bella.