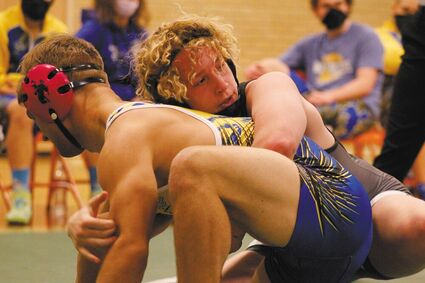 The Wolves' Hunter Davis grapples with his opponent from Shoshoni Saturday morning at Monroe Elementary School. The Wolves won their first dual of the season Saturday.

The Wolves were split between three wrestling competitions over the weekend, which included a home dual against Shoshoni Saturday. The Wolves defeated Shoshoni 19-18.

Head coach Josh Wisniewski said some wrestlers went to Heber City, Utah while other competed at a tournament in Evanston. Through the weekend, Wisniewski thought the Wolves wrestled well and believed the team matched up pretty well against the squad from Shoshoni. While the coach was happy with the team's performance, he plans to address a few issues before their next competitions. Specifically, he thinks the Wolves needs to i...