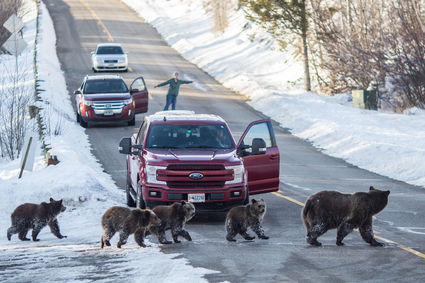 Wildlidfe biologists are growing concerned with the diet of northwest Wyoming's most famous grizzly, Grizzly 399. The bear, seen in this photo with her four cubs, has started focusing on human-related foods such as livestock grain, honey taken from a beekeeper's hives and a residential compost pile.

JACKSON - Bear biologist Mike Boyce was staked out on a road in south of Wilson for much of Tuesday keeping tabs on five grizzly bears that were napping, playing and feeding on a deer carcass.

"They devoured it in just a matter of a couple hours," Boyce said from the scene.

For three weeks and running this has been what the Wyoming Game and Fish Department employee's workdays look like: keeping tabs on grizzly 399 and her four cubs, spreading the word of their whereabouts and trying to keep both people and the bears out of harm's way.