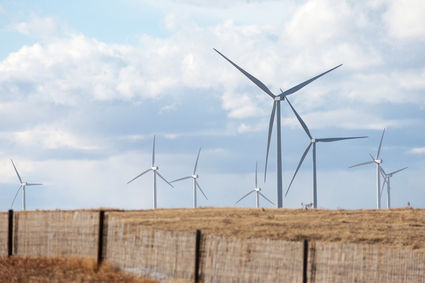 NextEra Energy windmills spin on the Belvoir Ranch west of Cheyenne. Wyoming lawmakers advanced a bill Wednesday that would require wind energy producers to pay taxes in the first three years of new projects. With Wyoming facing a budget deficit of roughly $225 million for the current 2021-22 biennium, lawmakers saw the exemption repeal as a way to potentially generate some additional revenue for the state.

CHEYENNE - Despite opposition from some officials in Laramie County and elsewhere in the state, Wyoming lawmakers narrowly advanced a bill Wednesday that would make wind energy producers pay more in taxes in the first three years of new projects.

The legislation, which won approval on a 7-6 vote from the Joint Corporations, Elections and Political Subdivisions Interim Committee, would remove a tax exemption on electricity generation that applies to new wind energy projects in their first three years of existence. Under current law, wind energy producers are taxed $1 per megawatt hour of win...