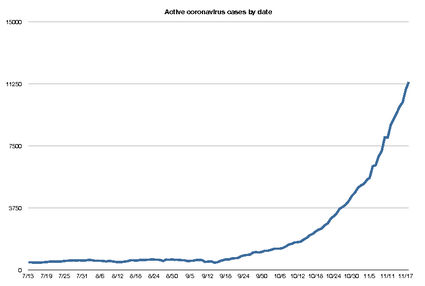 More than 1,000 Sweetwater County residents have contracted COVID-19 since the start of the pandemic and some resources are being stretched thin.

According to Dr. Jean Stachon, the county’s health officer, the county has seen a 40% percent increase in positive COVID-19 cases since Halloween, growing to 1,075 as of Monday from 480 at the end of October.

At the end of September, the rate of positive COVID-19 tests conducted in the county was less than 2%. Over the weekend, that number has increased to 25%. She said if numbers continue to increase at their current pace, the county’s health system will be overwhelmed. Dr. Stachon also said Memorial Hospital of Sweetwater County’s emergency room has recently seen four to five COVID-19 patients a day who are being sent home with oxygen and told to come back if their condition worsens.

Already, some services have been modified to deal with the large influx of positive cases recently reported. Kim Lionberger, director of the county’s board of health, said the organization has added positions to help contact people who test positive for the disease with their isolation orders, but have since stopped contacting people who were closely associated with those positive cases, opting to help provide information to people who test positive and request them to contact people they’ve been close to and possibly infected.

Lionberger said the school districts have been helping out in this regard as school nurses have taken to reviewing video of students who tested positive for COVID-19 and have contacted people who had contact with those individuals as well as students who did not wear a mask while near the infected student. The nurses have also given those students information about coronavirus testing, as well as a date they can return to school.

With people who tested negative for the disease, Lionberger said the board of health’s goal is to contact everyone, but its not always easy to reach people. She also said the Curative COVID-19 test results go directly to the person tested, not to the hospital or healthcare provider.

“We’ve always tried to contact all the negatives,” she said.

Testing also has been impacted by the local and national surges in COVID-19 rates. Dr. Cielette M. Karn, director of MHSC’s pathology department, said the number of some tests on-hand is at a critical level, while the time it takes to return those tests has increased. Dr. Karn said the number of Cepheid COVID-19 tests was down to 13 Monday, with the hospital averaging use of 17 such tests each day. The Cepheid test is used for obstetrics, pre-operative and inpatients and having 99% accuracy. Dr. Karn also said the turnaround time on oral swab tests has increased, with results for high-priority tests ranging between three and four days, while others can take up to seven days. COVID-19 has also impacted her department, with five employees in isolation after testing positive.

“I’m still waiting on results from (last) Tuesday,” she said.

She said CRMC is keeping its fast-acting tests for priority people in Green River, which include school teachers and caregivers at Mission at Castle Rock. However, the demand for testing has resulted in the medical center exceeding its testing capacity.

“This is not a level of testing we can continue for very long,” she said.

Dr. Fauntleroy said several providers at CRMC have been exposed to COVID-19 and are unable to come in to the clinic.

As infections continue to increase in Sweetwater County, Dr. Stachon has requested a mask mandate from the Wyoming Department of Health, joining seven other counties in doing so. It was approved by the state Tuesday night.

Stachon said transmission has mainly occurred amongst small gatherings as opposed to public places such as schools and medical clinics, but is convinced more stringent restriction to curb the coronavirus’ spread and hopefully ease its impact on local and regional medical facilities.

Questions of enforcement continue to circle the mandate as Tim Kaumo, the Mayor of Rock Springs, and Daniel Erramouspe, Sweetwater County Attorney, are questioning how it would be enforced.

Erramouspe said the penalties for violating the mandate all involve jail sentences with a 30-day sentence issued to the first violation, a six-month sentence for the second and a year in jail for the third. A wrench thrown into this process is the suspension of jury trials announced by the Wyoming Supreme Court through the end of 2020 and Erramouspe believes anyone charged with violating the mandate will want a jury trial.

Erramouspe also said a situation where someone is arrested is serious in itself and believes he’s ethically bound to press charges only if he’s reasonably sure he could win a jury trial. Another problem with the mandate he sees is the fact it’s creates a criminal charge that’s held up to a person not answerable to county voters -- Dr. Stachon.

Kaumo also sees enforcement as a challenge, describing the situation as a nightmare for police officers. He also said some Rock Springs businesses have posted signs telling customers not to come in if they’re wearing masks. He said he has waited for the state to initiate stricter guidelines to combat COVID-19’s spread. A similar message came from Gov. Mark Gordon last week while speaking to reporters, though focused at the counties.

Gordon said the counties have his endorsement to take whatever measures they need to. The political brinkmanship regarding who would be the one to issue stricter guidelines or mandates was criticized by Dr. Stachon.

“It seems that people who are elected are more concerned about staying elected,” she said. “I’m not running for office, I don’t have to worry about the votes I won’t get.”

Dr. Stachon and Gordon have both hinted at stricter state recommendations being discussed, through what those recommendations are is not known publicly. Gordon said he’s waiting for this week’s infection numbers, but added that restrictions would be stricter. He also said masks would be involved, but they would not be the only orders, saying “everything is on the table.”

For Dr. Stachon, even if a mandate is difficult to enforce, enacting one would provide benefits. She other Wyoming counties that have enacted on have seen much higher compliance rates compared to before a mandate was issue, saying people often want to follow the rules if they’re established. Dr. Stachon said the mining industries in Southwest Wyoming have sent a letter to the state asking for stricter guidelines as well. Industry representatives, along with other leaders throughout the county, are working on a marketing campaign to urge residents to follow the health recommendations already issued.

According to Dr. Poyer, masks do help in preventing the spread of COVID-19. While she admits they don’t provide 100% protection, someone wearing a mask is drastically decreasing the chance of contracting the coronavirus. She said proof of that comes from the fact that transmission is rarely occurring in schools and in patient-provider interactions.

However, masks are not the only action needed to curb the spread as other actions like social distancing and frequent hand washing also fight COVID-19’s spread.