Wolves' season comes to an end 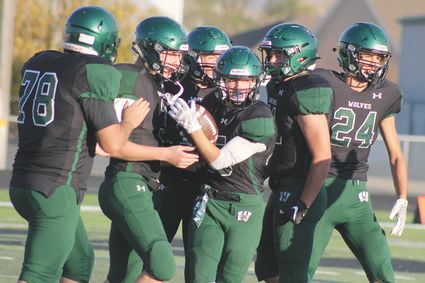 The Wolves celebrate an interception during a home game earlier in the season. The Wolves' playoff dreams were dashed after losing to Star Valley 25-6.

In a game that was much closer than the score indicates, the Star Valley Braves pulled away from the Wolves for the victory, eliminating the Wolves from the playoffs.

The Wolves moved the ball initially on their first possession, but an interception ended the drive and Star Valley mounted a long drive on the ground before scoring on a short pass. A P.A.T., failed, but Star Valley had a quick 6-0 lead.

The Wolves then mounted a six-play drive, with the big play and 31-yard run by senior running back James King, but on forth down the Wolves tried a fake punt and senior Seth White had a good run, but came up just short. The Braves then took over.

This time, Star Valley was stopped after eight plays and had to punt the ball back to Green River. The Wolves then pounded Star Valley for 16 plays; with King, Bracken Miller, Kolby Ivie, Oran Watts and Jachob Fuss all carrying the ball for positive yardage. The drive ended in a 27-yard field goal by Watts and the Wolves narrowed the score to 6-3.

Things were looking good for Green River, but on the ensuing kickoff, Star Valley got a big return to midfield to start their drive and nine plays later, they scored again. Their second P.A.T. kick was blocked to take a 12-3 lead at the half.

The Wolves kicked to Star Valley to start the second half and Star Valley marched right down the field, but a pitch play saw the ball go into the end zone and the ball was turned over to the Wolves.

King then carried the load with a couple good runs from Miller and two pass completions by Fuss on a 16-play drive, but a 24-yard field goal try barely missed its mark and the Wolves came away with no points.

The third quarter ended with neither team scoring and it was still any body's game with the score 12-3 to start the forth quarter.

The Braves played a tough defense, not allowing any points by the Wolves as Star Valley was able to score twice, with one P.A.T. good for 13 points and a final score of 25-3.

The win keeps the Braves in the playoffs with a 4-5 record while the Wolves ended the season at 2-6.

Head football coach Kevin Cuthbertson commented on the game and his team's season.

"It was a gut wrenching, I was so proud of this team, our kids battled and left their hearts on that field. We ran the ball better than we have all year, we owned the time of possession and went on two 17-play drives. But, the same problems we had all year bit us again, stalling in the red zone, penalties and mistakes on key downs hurt us and eventually cost us the game," he said.

"As we set out this season, our number one goal was to change the culture of the program. We, as a coaching staff, of course wanted to win every game and bring home a state championship. But more importantly we didn't want to focus on building a win/loss record. We wanted to build young men, we wanted to turn these boys into men that not only we'd be proud of, but that the community and their own families could be proud of. Young men who learned the value of hard work, how to contribute and help others and would strive to better themselves daily not just on the football field but in the classroom in the community and in their homes," he said.

"Those were our goals and we achieved those, as I said I couldn't be more proud of this team and the program we are building at Green River High School. This year was the first step in what will hopefully be a long journey and our seniors set the standard," Cuthbertson said. "They set the bar by which all others will be judged with their leadership, their attitudes and hard work. The underclassmen have some big shoes to fill in the years to come, but I have faith that they can follow in those footsteps, and turn this program into not only the pride of Green River, but of the entire state. That's our vision and we will continue to work towards accomplishing that."