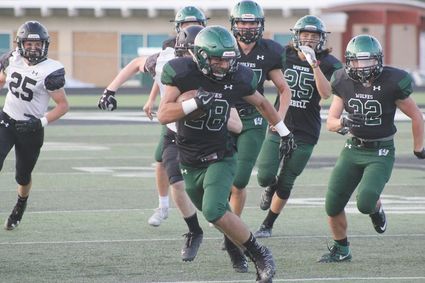 Gabe Burdette takes the ball down the field as the Wolves take on the Jackson Broncs Friday evening. The Wolves came up short against the Broncs, taking the loss at the end of the night.

The Jackson Broncs came into Wolves Stadium undefeated, with a reputation for having a team filled with big, strong, fast, players.

The Wolves were riding high themselves after a close come-from-behind road win against the Evanston Red Devils the week prior.

Jackson won the coin toss to start the game, but deferred and kicked off to the Wolves. During the first two plays, Green River gained no yardage. Things were not looking good, but on third down, senior quarterback Jachob Fuss found junior wide receiver Dylan Taylor for a big 31-yard pass completion.