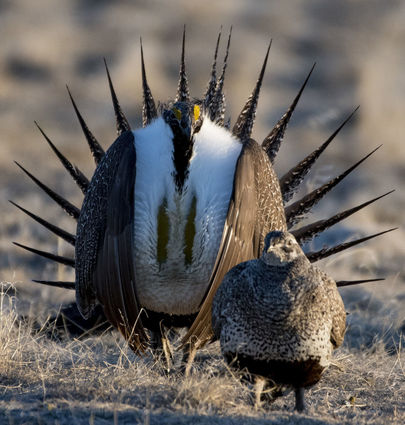 A male greater sage grouse displays for hens in sagebrush steppe habitat in the Big Horn Basin. Sage grouse will strut and fight to catch the eye of females during their spring mating rituals.

POWELL - Greater sage grouse numbers are expected to continue dropping across the West for the fourth year in a row, alarming scientists and conservation officials. It also raises questions of federal management of habitat home to the grouse and more than 350 other species dependent on the sagebrush steppe.

Since the signing of a historic collaborative conservation plan in 2015, state-level data suggest sage-grouse populations have declined 44% on average. Scientists and conservation organizations are sounding the alarm, arguing the Trump administration is continuing to prioritize the use o...