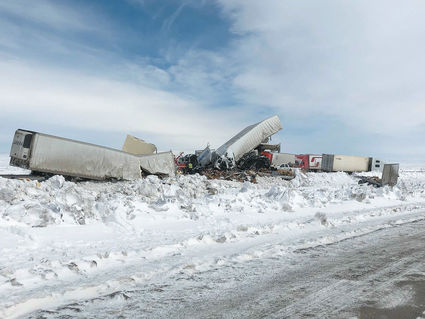 The aftermath of a massive vehicle crash Sunday is seen from a Wyoming highway Patrol vehicle. The crash resulted in both Interstate 80 lanes east of Rock Springs being closed. As of Tuesday at noon, the Wyoming Department of Transportation's Wyoming 511 phone app listed the closure to last until late Tuesday night.

CASPER - At least three people died in a wreck involving 80-100 vehicles Sunday on Interstate 80, while a second crash on I-80 involving at least 30-40 vehicles occurred around the same time, just miles away.

The larger crash came amid winter conditions on westbound I-80 at milepost 184 near Creston Junction. Videos posted to social media depict a chain-reaction wreck involving cars, trucks and tractor-trailers on icy roads with poor visibility.