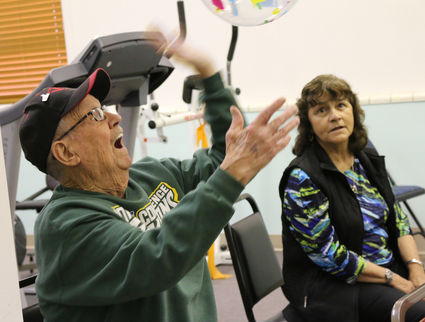 Wes Heikkinen serves the beach ball over the net.

The sounds of laughter and yelling traveled down the hallway, making visitors wonder what was going on.

During chair volleyball at the Golden Hour Senior Center last Wednesday, volleyball players were laughing and shouting with almost every play.

As the beach ball was hit, seniors moved in their chairs to try and hit the ball. Whenever one would move off of the chair in an attempt to get the ball, they would get called out for it.

When senior Goldie Buckendorf moved out of her seat to get the ball, someone yelled, "Cheeks in the chair Goldie."

After this, everyone in the room started laughi...