Wolves shut out by Star Valley 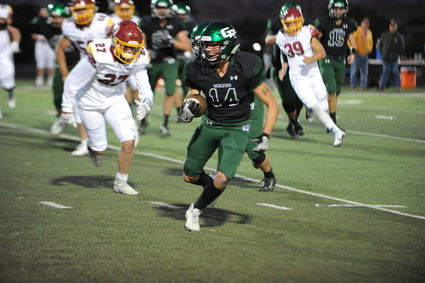 Green River Wolves' player No. 14, Isaac Ruiz, moves as quickly as he can up the field before the Star Valley players take him down.

Star Valley started the game with a good 22-yard kickoff return, which put the ball on the 32-yard line to start their drive. The Braves mounted a 10-play drive with all running plays, which covered 68 yards and took almost half of the first quarter before one of their large players got in the endzone, 7-0.

On the ensuing kickoff, the Wolves got an excellent return of their own when Tayler Jensen got of a 33-yard return, but the Braves defense stopped the Wolves on three plays and the Wolves had to punt. Star Valley however, was stopped by the Wolves defense, including a big sack by Jacob Martinez and the Braves were forced to punt the ball back to the Wolves.

It was Green River's turn to mount a long drive as the Wolf Gabe Burdette carried the ball eight times, while Tayler Jensen ran it once and quarterback Jacob Fuss completed four of six passes, including one for 28 yards to Jensen and another to Dylan Taylor for 12 yards but, the drive stalled on a quarterback sack and the Wolves 29-yard field goal attempt wasn't good.

On Star Valley's first play, they picked up 6 yards running, but Tucker and Jensen teamed up to stop them for no gain. After two more short runs and a pass broken up by Korbin Serrano, Star Valley had to punt.

The Wolves rotated quarterbacks and after a short gain on first down, Star Valley came up with an interception to get the ball right back.

Star Valley ran the ball twice for short gains before Payton Tucker stepped in and intercepted the ball and the Wolves got the ball right back.

Green River switched back to Fuss as quarterback who completed a short pass to Isaac Ruiz and after a couple more runs by Burdette the Wolves had to punt.

On their first play of the series, Star Valley fumbled and the ball was recovered by J. D. Renfro for Green River, but Green River wound up having to punt.

After giving up a 15-yard run to start the drive, the Wolves' defense stopped Star Valley's passing game with defense provided by Jensen and Dylan Tayler.

The first half ended with Star Valley on top 7-0.

To start the second half, Ruiz returned the ball 18 yards to start Green River's first second-half drive, Burdette carried the ball a couple times for a first down, but the drive stalled and the Wolves had to punt.

After a penalty against Star Valley on first down, the Wolves got a steady diet of Star Valley's big running back as the 225-pound senior Rj Cazier, who ran it three plays in a row for a first down with stops by Tucker, Serrano and Harvey among others. Then Cazier broke one for 29 yards and had to be brought down by Green River's safety Seth White.

After one carry by Dean Shaw of Star Valley for 14 yards, Cazier ran the ball seven times in a row, wearing down the smaller Green River defense and scoring on a 2-yard run, with the P.A.T., the score was 14-0 to culminate a 13 play 83-yard drive.

The Wolves were stopped quickly by Star Valley's defense in three plays and had to punt on the last play of the third quarter.

The Wolves rose up with some great defense of their own as Star Valley lost 9 yards on two plays and had a 5-yard offsides penalty as they went backwards 14 yards before a sack by Thomas Harvey caused them to punt.

Green River's next possession mirrored Star Valley's previous series and the Wolves had to punt.

The punt, which netted 25 yards, gave Star Valley good field position until they got called for a 15-yard personal foul.

However, the Braves star receiver, senior Chase Merrell, caught a pass and broke lose for 52 yards and Cazier ran the ball three times, scoring on a 1-yard run, and Star Valley went for a 2-point conversion and were successful to move the score to 22-0.

The Wolves will be on the road this week to take on Jackson Broncs Friday at 6 p.m.