Pie in the face fundraiser 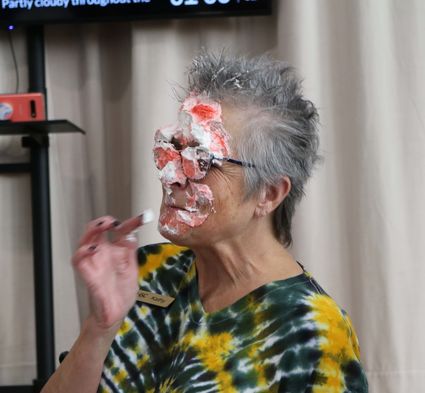 Golden Hour Senior Center receptionist Kathy McCormick can't even see out of her glasses after getting a pie in her face.

Making sure seniors have enough money for a new technology center is something the employees at the Golden Hour Senior Center will take a pie in the face for.

Tuesday afternoon, the dining room was full of seniors waiting to find out who would get a pie in the face: the office staff or the kitchen staff.

During the fundraiser, jars were left out with pictures of each group on them. GHSC activities and marketing coordinator Irish Kreis said those who raise the most money will be the "winners" of the competition and will then receive their prize: a pie in the face.

Even though money was put in throughout the entire fundraising event, a whole bunch of people waited until the last day to put money into the jars to get their say in who would get a pie in the face.

As the final tally was being completed, office staff and kitchen staff were gathering around to see who won.

Prior to the official announcement, seniors already had a pretty good idea of who was getting a pie in the face when a member of the kitchen staff went running through the dining room cheering.

Then, the official announcement was made that office staff had won the competition and would received their reward. This led to the kitchen staff proudly bringing out the whipped cream filled pies.

The office staff lined up and so did the kitchen staff with whipped-cream pies in hand and as the anticipation built and some seniors already started laughing. 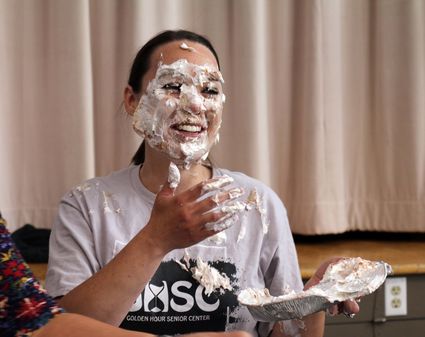 Golden Hour Senior Center executive director Jackie Grubb laughs as she realizes just how much whipped cream she has all over her.

On the count of five, which seemed to go really fast, the pies starting getting pushed into the office staff's faces, including Grubb, Kreis, officer manager Marcia Driggs, receptionist Kathy McCormick, and office aide Sabreena Stine.

All five of them reacted to the whipped cream pie being pushed into their faces. Kreis reacted with laughter, Stine just decided to go with the flow and eat the pie dripping off of her face, while Grubb chased one lady, a heckler, around the dining with what was left of her cream pie. She may had got some pie in the lady's face, but she wound up getting a second dose of whipped-cream pie in her face. It was all in good fun as everyone was laughing.

After the event was over, the employees set to work cleaning themselves and the dining room.