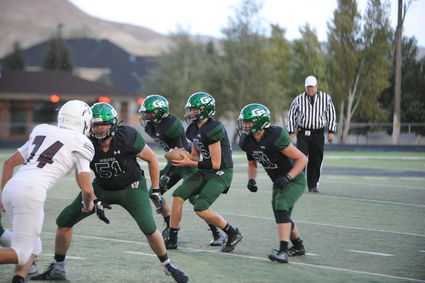 Green River Wolves' quarterback Jachob Fuss grabs the ball as No. 51 Seddon Sanders blocks one of the Torrington players from getting close to him.

On a windy, rainy and chilly game at Wolves Stadium before a large homecoming crowd junior Jachob Fuss started his first game as quarterback for the Wolves. He led the Wolves on offense to their first win of the season. Fuss was backed by strong running from fellow junior Gabe Burdette and a host of big play performances on offense led by senior Tayler Jensen who scored both of the Wolves touchdowns.