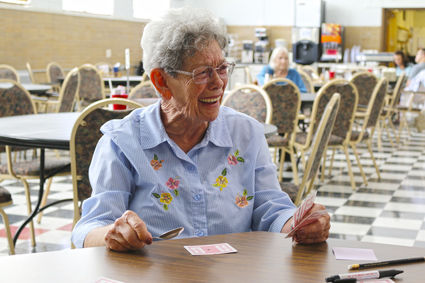 Gail Robinson laughs as the other players fight over the spoons in a competitive game of Spoons Thursday morning.

As the cards were passed around the table as fast as one could, the tension started to brew.

Each of the players would quickly glance at their cards to see if they had collected four of a kind yet.

As they would get closer and closer to completing the task, they would start glancing at the spoons in the middle of the table, at their cards and then at the other players to see if any of them had taken a spoon.

All of a sudden, one player grabbed a spoon, which left the other players scrambling to grab a spoon as fast as they could.

Only one player didn't reach a spoon in time.