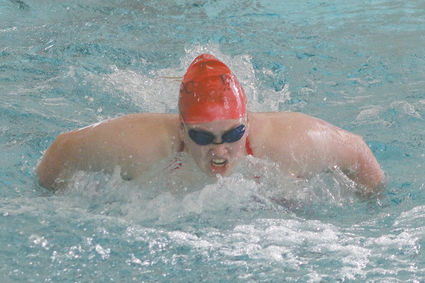 While many children and teens enjoy the fun and free time the summer months bring, a dedicated few continue to hone their skills in the pool and prepare for a summer state event in South Dakota this weekend.

Members of the Sweetwater Aquatics Team, a USA Swimming club team comprised of members from Green River, Rock Springs and Lyman have practiced throughout the summer and prepare for their final meet, which starts Friday. The state meet, originally scheduled to take place in Gillette, was moved to Rapid City, S.D., after the pool became unusable.

One of the team's competitors, Cherylann Mortiz, said the outdoor pool does present some challenges an indoor pool doesn't have. For example, participants in the backstroke will have to contend with the sun in their eyes, which Moritz said makes it more difficult to stay within the lane.

"We've gone to outdoor meets before, so it's not completely new," she said.

For Moritz, this will be her final opportunity to compete at a summer state event. The incoming senior at Green River High School has competed in USA Swimming for the past eight years and while she looks forward to the upcoming girls high school swim season, she's also excited for her last state swim meet for the club. While she admits she does feel some sadness about leaving club swimming, many of her friends will compete with her during the high school season.

The summer swimming season is short, starting in May and ending in July. The winter club season is much longer, starting in August and concluding in March. Moritz said she enjoys the summer season because she can work on a variety of strokes, whereas the high-school competition causes swimmers to focus on one or two events and strokes. Moritz plans to compete in multiple events, including the 100 meter and 200 meter backstroke; as well as the 50 meter, 100 meter and 400-meter freestyle.

While she competes in more events through USA Swimming than she would through the GRHS swim team, the additional swim time doesn't bother her. She said she was initially worried about competing in more events when she started USA Swimming, but isn't concerned with it because of the training swimmers undergo.

Another Green River swimmer, Hailey Uhrig, will also compete at the event and is aiming for an Olympic trial qualifying time of 1.10.99 in the 100 breaststroke. She's currently at 1.14.27, but hopes to make the cutoff by the end of the year. She also aged up and will compete in the age 15-16 division and aims to set state records. However, regardless of her plans at the competition, she isn't completely focused on her tasks ahead.

"I'm just going to go and have fun," Uhrig said.

Randy Walker, one of the team's coaches, said the final week of practices is aimed to sharpen their stokes and let swimmers recover prior to the competition. He said the swimmers during normal practices can swim between 5,000-10,000 yards a day, four days a week. He anticipates the group to remain one of the top three competitors at the event, though another coach has higher hopes.

"We have a good chance to win this thing," coach Ron DeFauw said.

With the summer season, Walker said he can tell which athletes are dedicated to the sport because practices aren't mandatory.

While the swimmers' drive to improve themselves in the pool aids in competition, swimmers also grow in other ways through the sport. Moritz said she's learned a lot through the years under Walker's tutelage.

She said Walker has provided constructive criticism and is always willing to help, saying she's learned to be able to improve her strokes on her own while practicing. However, she also says she's matured and learned to be more of an adult with Walker's advice as well.

"He's helped me grow as a person," Moritz said.