Students take trip of a lifetime 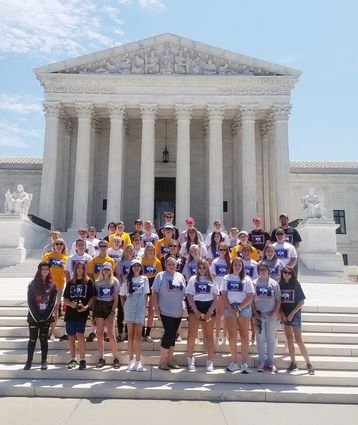 The entire group gathered in front of the Supreme Court for a quick photo on the same day they visited the United Stats Capitol.

A high school trip inspired a seventh-grade teacher to provide the same opportunity for students in her school.

"I took a trip like this when I was in high school and it changed my life," Nielsen said. "Seeing things in person changes a person."

Nielsen said the trip offered to LMS seventh and eighth-grade students to go on was similar to the one she took in high school. She said this experience is probably one of the reasons why she wanted to become a history teacher. It truly was a life-changing experience for her.

"That's why I wanted to offer it to my students," Nielsen said. "I just wanted them to experience it."

With this in mind, Nielsen and LMS teacher James Quiroz made sure to include as many museum and memorial site visits in the trip.

On the first day, the group visited the White House, Air and Space Museum, Natural History Museum, Holocaust Museum, the American History Museum and participated in guided tours of the monuments.

Chevy Stanton, LMS seventh-grade student, said he was impressed by a giant squid preserved in formaldehyde at the Natural History Museum, while eighth-grade student, Grace Schulze found another specimen she liked more.

"I liked the caterpillar because I learned that it breathes out the side of (its) body," Schulze said.

"We got good compliments on our group everywhere we went," Nielsen said.

The students were not only very respectful at the memorials they visited, but during the tours and other events they attended.

Stanton said he would never forget how fireflies came out while they were walking around the memorials. It was a sight.

On the second day, they visited Arlington Cemetery, they saw a changing of the guard, explored the grounds at Mount Vernon Mansion and attended a guided tour. They also participated in a ghost tour in Alexandria, Va.,

While at Mount Vernon Mansion, the group had the opportunity to meet with an actor who was dressed up as Mrs. Washington. Nielsen said the students tried hard to get her to break character, but they were unsuccessful.

On the third day, the group toured the United States Capitol. They were supposed to meet with U.S. Senator Mike Enzi, U.S. Sen. John Barrasso and U.S. Rep. Liz Cheney, however, they were busy, so they met with Cheney's employees.

It was during this portion of the trip where Stanton worked on his question to receive high school credit. His question was "How did the cities change for the growing population?"

Nielsen said some students chose to use the trip as a way to obtain high-school credit. They were required to come up with a question, complete research to find an answer and then apply the question to somewhere local.

Later on this day, the group traveled to New York and visited the Empire State Building.

This was on of the group's favorite spots.

"It made everything seem so small," Stanton said.

Stanton said they could see almost every building they visited while in New York from the Empire State Building.

What surprised the students was how the bellhops were wearing traditional suits at the Empire State Building. It was like stepping back in time.

On the fourth day, the students visited the Statue of Liberty, Ellis Island, Times Square and participated in a guided tour of the 9/11 Site and Memorial. They also had the chance to ride the subway and see Phantom of the Opera on Broadway.

Stanton and Schulze both had different views of the Statue of Liberty.

"I thought it would be bigger," Stanton said. "I was sad I didn't get to see it lit up at night."

He said the weather was really foggy when they were there and so they couldn't see the statue at night. 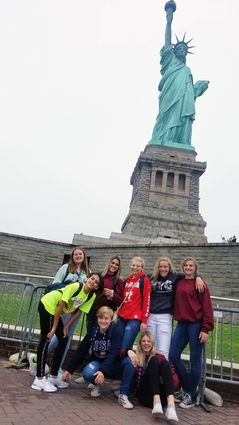 Visiting the Statue of Liberty in the back row are from left to right Grace Schulze, Ciera Silva, Katy Pope, Madison Moffat and Terryn Avery and in the front are Artina Karimi Shelby Carson and Emma King.

Nielsen said the students on the 9/11 tour were one of the first ones to go on a tour with a first responder who responded to the emergency calls on the day 9/11 occurred. They shared personal stories, which left many on the tour in tears. Nielsen said these children weren't old enough to remember this tragic event and she was impressed with the tour guides willingness to share their stories. A couple of the tour guides said it was sort of therapeutic.

On the last day, the group squeezed in a visit to Central Park. All agreed they thought the park was going to be loud because it was surrounded by the city, but it was quiet.