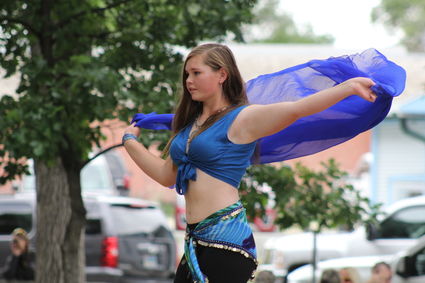 A conflict between the city of Rock Springs Mayor Tim Kaumo and the Sweetwater County Events Complex Executive Director Larry Lloyd has been patched over and a memorandum of understanding between the city and complex board is anticipated to be completed soon, but the issue could have threatened the future of the National High School Finals Rodeo being at the events complex.

According to emails sent between Lloyd, Kaumo, county commissioners and members of the Rock Springs City Council provided to the Star, Kaumo sought a formal MOU between the city and the events complex board establishing an agreement for use of the campsites on city property.

A proposed MOU regarding the campground was heard during the May 7 Council meeting. That MOU outlined an agreement recognizing the city as owners of the land and the events complex as the entity that would maintain the campground. The agreement also states the campsite would only be rented out in conjunction with special events and with express permission of the city, highlighting a desire not to compete with local businesses. It would have given the complex right of first access to the 462 city-owned Wataha Recreation Area RV campsites for any event recognized in supporting the economic benefit of both the city and county. It also states the complex would collect all payments for use of campsites, except for use of the city-owned campsites for city events, where the city would take those payments.

The MOU was tabled at the May 7 and May 21 meetings, before being removed from the table at the June 4 meeting.

According to an email Zotti wrote to members of the Council, county commissioners and events complex board, the events complex reviewed the MOU the city passed and sent a second proposed MOU to the city, this time containing language which would indemnify and hold the city harmless, as well as maintain both entities' right to immunity under Wyoming statutes.

"... it complied with everything else Tim had requested up to that point," Zotti wrote.

"The SEC would be waiving their right to immunity as set forth in State statute if they were to purchase a liability policy and name the city of Rock Springs as additional insured," Zotti wrote.

Zotti also questioned why the complex's revision wasn't presented to the Council for approval, believing it to be very similar to the MOU already approved.

In an email Lloyd sent to the Council June 28, he cites Kaumo's request to pay for use of the White Mountain Campground as the catalyst for the board deciding to move all operations onto county-owned land at the complex. He also told the Council the complex would barricade access to the campground and shut off electrical power supplied by the complex. They would then turn over maintenance to the city.

"Although we are booked with the National High School Finals Rodeo for 2024 and 2025, we will notify them that we are no longer able to host the event," Lloyd wrote. "All other events will be shifted to utilize only events complex property and we won't recruit or solicit events larger than we can accommodate with our campgrounds."

"The city of Rock Springs requires any person or entity to have an MOU in place for the use of city land or buildings, this is no different and was the topic of discussion while the construction was underway years ago and yet never completed," he wrote.

Kaumo believes taxpayers would agree with him that allowing the city to keep 50 percent of the revenue generated from the Wataha campsites is "more than reasonable," citing the city's contributions to the initial project.

According to Kaumo, the city would receive $6,900 a day from large events filling the campground, out of approximately $36,000 a day the events complex would receive.

"At this point in time, I see no need to pursue an MOU and the city will be content in taking over the very little maintenance costs of these sites on city land and metering them separately," Kaumo wrote. "I appreciate your working in good faith to resolve such a simple issue. Lord forbid we have a large issue to resolve in the future."

Zotti proposed a workshop meeting between representatives of the three entities to discuss the issue in an attempt to solve the dispute and not jeopardize the relationship between the complex and city.

According to Sweetwater County Commissioner Roy Lloyd, the parties met amicably last Wednesday evening and discussed the issue. Larry Lloyd said an MOU very similar to the one originally passed by the city council would likely be finalized in the next seven days.

Both Larry Lloyd and Kaumo made comments during a ribbon cutting ceremony for the NHSFR Monday indicating both intend to support the rodeo and a solution that doesn't disrupt their relationship.

"We're glad to see so many people in the city," Kaumo said Monday. "We won't let politics get in the way."