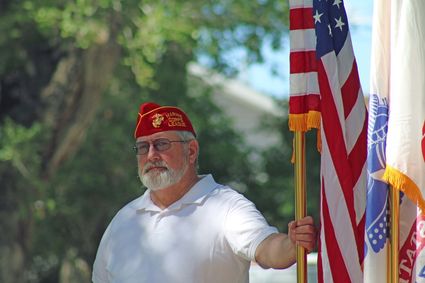 Dave Gillman, Chaplin for the Marine Corps League, holds the American flag during the ceremony to prevent it from getting blowed over by the wind.

After each name was called, a bell chimed.

Its sound symbolized each name being called represented a soldier who was no longer with us. They each gave their lives during World War I.

On Saturday afternoon at Bunning Park in Rock Springs community members gathered to pay tribute to those who made the ultimate sacrifice during the World War I and American Legion Centennial ceremony. This ceremony was organized by the High Desert Chapter of the Daughters of the American Legion and took place in front of the WW I Doughboy Monument, which has 33 names engraved on it. Since the monument was made,...